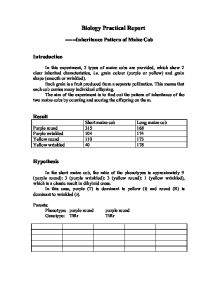 Biology Practical Report ------Inheritance Pattern of Maize Cob Introduction In this experiment, 2 types of maize cobs are provided, which show 2 clear inherited characteristics, i.e. grain colour (purple or yellow) and grain shape (smooth or wrinkled). Each grain is a fruit produced from a separate pollination. This means that each cob carries many individual offspring. The aim of the experiment is to find out the pattern of inheritance of the two maize cobs by counting and scoring the offspring on them. Result Short maize cob Long maize cob Purple round 315 168 Purple wrinkled 104 174 Yellow round 110 173 Yellow wrinkled 40 178 Hypothesis In the short maize cob, the ratio of the phenotypes is approximately 9 (purple round): 3 (purple wrinkled): 3 (yellow round): 1 (yellow wrinkled), which is a classic result in dihybrid cross. ...read more.