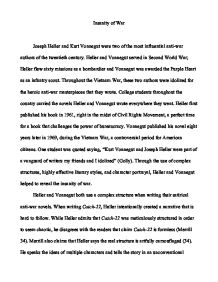 Insanity of War Joseph Heller and Kurt Vonnegut were two of the most influential anti-war authors of the twentieth century. Heller and Vonnegut served in Second World War; Heller flew sixty missions as a bombardier and Vonnegut was awarded the Purple Heart as an infantry scout. Throughout the Vietnam War, these two authors were idolized for the heroic anti-war masterpieces that they wrote. College students throughout the country carried the novels Heller and Vonnegut wrote everywhere they went. Heller first published his book in 1961, right in the midst of Civil Rights Movement, a perfect time for a book that challenges the power of bureaucracy. Vonnegut published his novel eight years later in 1969, during the Vietnam War, a controversial period for American citizens. One student was quoted saying, "Kurt Vonnegut and Joseph Heller were part of a vanguard of writers my friends and I idolized" (Golly). Through the use of complex structures, highly effective literary styles, and character portrayal, Heller and Vonnegut helped to reveal the insanity of war. Heller and Vonnegut both use a complex structure when writing their satirical anti-war novels. When writing Catch-22, Heller intentionally created a narrative that is hard to follow. While Heller admits that Catch-22 was meticulously structured in order to seem chaotic, he disagrees with the readers that claim Catch-22 is formless (Merrill 34). Merrill also claims that Heller says the real structure is artfully camouflaged (34). ...read more.

Catch-22 becomes faster as it approaches the climax and the end of the novel. This change of pace ties directly to war; at first everything is slow, then suddenly, the characters are in the middle of a firefight or bombing mission, then it quickly ceases. Slaughterhouse-Five uses a slightly faster pace throughout the novel; Vonnegut's narrative is much shorter and does not go into as much depth as Heller's story does. However, this is the same feeling that many soldiers of the Second World War felt. The soldiers and bombardiers do not always know what is happening next or, in regard to the current Iraqi war, which is the enemy and which is not. Heller employs another literary device, called a motif, a recurring theme or device in literature, and in the novel written by Heller, the motif was catch-22. Heller incorporates many forms of the catch-22 throughout the novel. The main catch occurs when Yossarian must continue flying missions. Obviously anyone willing to risk their lives by flying these missions is crazy. The only way to be granted permission to stop flying the missions is to ask the commanding officer, but he cannot grant permission to be grounded unless it is asked of him. However, anyone sane enough to ask a commanding officer to be grounded is clearly not insane because they have regard for their lives. Therefore, they must continue flying missions. ...read more.

A few characters from Slaughterhouse-five share the same insanity of those from Catch-22, such as Roland Weary, who is intent on glorifying himself and uses the fact that he saved Billy multiple times to do it (Vonnegut). Although the characters from Slaughterhouse-five don't carry on crazy dialogues, they still portray madness through their actions, like when Wild Bob inquires if Billy is part of the regiment that he is colonel of, even though all his men are dead (Vonnegut). Heller and Vonnegut use their characters in a way that proves that war does really take a toll of a person's mental situation. Through their motifs, Catch-22 and "So it goes", Heller and Vonnegut show that bureaucratic systems and death do not mix well. Systems like this shouldn't have control over such a life altering things, especially since they carry the attitude "So it goes" throughout the war. It really is insane for a system to be in place in which someone has absolute control over another's life. And the ability of these people to have a "So it goes" attitude is as pure madness. The structure in Slaughterhouse-five and Catch-22 are very similar in that the both follow a chronology that is nowhere near in order. This is significant because it puts the reader into the insanity of war. The have the same confusion that soldier does until they realize what is really going on. Through the use of characters, motifs, and confusing chronologies; these brilliant antiwar authors capture the insanity of war. Sutton 7 ...read more.