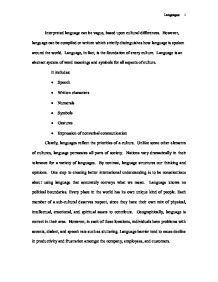 Interpreted language can be vague, based upon cultural differences. However, language can be compiled or written which strictly distinguishes how language is spoken around the world. Language, in fact, is the foundation of every culture. Language is an abstract system of word meanings and symbols for all aspects of culture. It includes: * Speech * Written characters * Numerals * Symbols * Gestures * Expression of nonverbal communication Clearly, languages reflect the priorities of a culture. Unlike some other elements of cultures, language permeates all parts of society. Nations vary dramatically in their tolerance for a variety of languages. By contrast, language structures our thinking and opinions. One step to creating better international understanding is to be conscientious about using language that accurately conveys what we mean. Language knows no political boundaries. Every place in the world has its own unique kind of people. Each member of a sub-cultural deserves respect, since they have their own mix of physical, intellectual, emotional, and spiritual assets to contribute. Geographically, language is correct in their area. However, in each of these locations, individuals have problems with accents, dialect, and speech rate such as stuttering. Language barrier tend to cause decline in productivity and frustration amongst the company, employees, and customers. ...read more.

This is the longest and most difficult stage for the groups to complete. There are steps that companies can take to prevent civil unrest within an organization. The following steps can be used to prevent confrontation and assist in creating a positive and productive environment: * Purpose - Develop a strong sense of purpose for the employees that transcend all differences including language. A common purpose will keep the working together for the common goal. By developing purpose, the organization is relaying the message that all the different groups and cultures are on the same team and are all one company. * Tell Stories - Stories help connect the groups. Through stories, different groups can relate to each other as people. Stories also give the groups a chance to voice its opinions and concerns. * Self Awareness - Companies should develop self awareness * Within the organization commonly, people are afraid of the unknown. By developing self-awareness, the organization forces the groups to face the unknown and to overcome their fears and insecurities. * Training Programs - Companies should implement training programs to teach the different groups to be culturally aware of one another. The programs should also include language courses to teach communication skills. "Organizations are adapting a number of approaches to overcome language barriers among employees" (Journal of Business, 2000). ...read more.

As relations grow in the workplace, the social interaction is not the same. For example, when Spanish-speaking employees interact with English-speaking employees some issues that formulate are: which language to speak or when to use an interpreter. In a social setting it is even harder when greeting and addressing people correctly. Thou not to provide a definitive answer to language as related to pronunciation, it is difficult to understand individuals whom speak English but with an accent. Often, individuals are asked repeatedly what is being said in order to convey what was said. Bahri (Language, 2003) states " Language as communication and as culture are then products of each other...Language carries culture, and culture carries, particularly through orature and literature, the entire body of values by which we perceive ourselves and our place in the world...Language is thus inseparable from ourselves as community of human beings with a specific form and character, a specific history, a specific relationship to the work." Language is a critical element of culture. Members of society generally share a common language, which facilitates day-to-day exchanges with others. There are many ways of communicating language in the workforce and, it is not the only way to show a line of interaction to work together but a way of social interaction. The work force is just one avenue to rectify the critical success for today's employer when diversity by today's standards is met. ...read more.