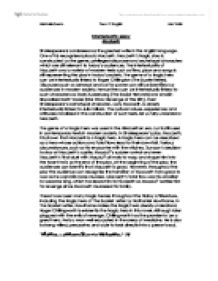 Intertextuality essay Macbeth. The intertextuality of Macbeth and a variety of modern texts such as films, plays and songs is still representing the play in todays society. The genre of a tragic hero can be intertextually linked to Roger Chillington (

Intertextuality essay Macbeth Shakespeare is considered as the greatest write in the English language. One of his recognised plays is Macbeth. Macbeth's tragic story is constructed by the genre, privileged discourse and archetypal characters which are still relevant to today's audiences. The intertextuality of Macbeth and a variety of modern texts such as films, plays and songs is still representing the play in today's society. The genre of a tragic hero can be intertextually linked to Roger Chillington (The Scarlet letter). Discourses such as betrayal and l**t for power can still be identified by audiences in modern society, hence they can be intertextually linked to such characters as Mark Zuckerberg (The Social Network) and Anakin Skywalker/Darth Vader (Star Wars: Revenge of the Sith). Even Shakespeare's archetypal character, Lady Macbeth, is closely intertextually linked to Julia Gillard. The cultural values, experiences and attitudes mobilized in the construction of such texts, let us fully understand Macbeth. The genre of a tragic hero was used in the Elizabethan era, but is still used in contemporary texts in modern society. In Shakespeare's play, Macbeth, it is shown that Macbeth is a tragic hero. A tragic hero can be described as a hero whose actions and fatal flaws lead to their downfall. Various circumstances, such as his encounter with the witches, Duncan's decision to stay at Macbeth's castle, Macduff's sudden arrival and even Macbeth's final duel with Macduff all work to warp and shape him into the tyrant he is by the end of the play. ...read more.

Macbeth and The Social Network are both intertextually linked as both texts show betrayal between loyal friends. The discourse of l**t for power is another element of the Shakespearean play, Macbeth, which establishes its relevance to modern society. Power can be defined as ability to do or act; capability of doing or accomplishing something. Macbeth's l**t for power develops into his fatal flaw which destroys his morality. Macbeth is given responsibilities and duties, yet he is teased with the promise of one day becoming King. This is done because he has a flaw; he is too determined. He doesn't let anything in his way of the goal, to be king. "The Prince of Cumberland! I must fall down on that Step, or jump over it, or it's in my way. Stars, put out your light! Don't let anyone see my black and deep desires. It could happen in an instant yet let that go, that thing that the eye is afraid to see when it is done". - (3) Act I, Scene iv, line 48-50 Anakin Skywalker/ Darth Vader can be intertextually linked with Macbeth. Although Anakin was looking for power to help his wife, he also loses his morality. His l**t for power soon increases as he began to use violence to look for that power. As his power started to increase, he joined the dark side, becoming Darth Vader. "Padm� Amidala: I was so worried about you. ...read more.

Julia Gillard manipulated Kevin's into slaying the ETS, which has lead to Kevin's downfall. It was not necessary for Julia to lead Kevin to his downfall as she would have become Prime Minister in time. However, her ambition of having a higher status in politics was strong, hence creating a flaw in her government, leading to her downfall. Both women have "seduced" their partners into becoming something greater, leading to their downfall. The audience can easily identify both women being the archetypal character of a seductress. Despite the fact that it Shakespearean plays were written over 400 years ago, it is still relevant to modern society. It is evident that the genre of tragic hero can still be found in modern texts such as The Scarlet letter. In addition, discourses of betrayal and l**t for power apparent to films such as Star Wars and The Social Network which can intertextually linked to Macbeth. The audiences are able to recognise the archetypal seductress in Julia Gillard and Lady Macbeth. Through genre, discourses and archetype characters, the audience can still identify the intertexual links between the Elizabethan era and modern text. Reference list 1. The Scarlet Letter by Nathaniel Hawthorne, Published on March 1981 2. The Social Network directed by David Fincher Columbian Pictures, 2010 3. Macbeth by William Shakespeare 4. Star Wars episode 3: revenge of the sith directed by George Lucas 2005 5. http://www.theage.com.au/opinion/lady-gillard-must-confront-climate-change-20110228-1bb3u.html, The age, Bella Counihan, Lady Gillard must confront climate change ?? ?? ?? ?? Michelle Seeto Year 12 English Mrs Vallis ...read more.