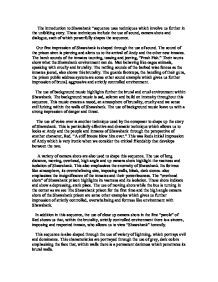 The introduction to Shawshank “sequence uses techniques which involve us further in the unfolding story. These techniques include the use of sound, camera shots and dialogue, each of which powerfully shapes the sequence.

Our first impression of Shawshank is shaped through the use of sound. The sound of the prison siren is piercing and alerts us to the arrival of Andy and the other new inmates. The harsh sounds of the inmates taunting, teasing and jeering, “Fresh Fish.” Their taunts show what the Shawshank environment can do. Men behaving like cages animals,

speaking with cruelty and brutality. The rattling sounds of the barbed wise fences as the inmates jeered, also shows this brutality. The guards footsteps, the handling of their guns, the prison public address system are some other sound example which gives us further impression of brutal, aggressive and strictly controlled environment.

The use of voice over is another technique used by the composer to shape up the story of Shawshank. This is particularly effective and dramatic technique which allows us to looks at Andy and the people and inmates of Shawshank through the perspective of another character, Red. “A stiff breeze blow him over.” This was Reds initial impression of Andy which is very ironic when we consider the critical friendship that develops between the two.

A variety of camera shots are also used to shape this sequence. The use of long distance, moving, overhead, high angle and up camera shots highlight the vastness and isolation of Shawshank. This also emphasizes the enormity of Shawshank. Its fortress like atmosphere, its overwhelming size, imposing walls, bleak, dark stones- also emphasizes the insignificance of the inmates and their powerlessness. The “overhead shots” of Shawshank prison highlights its vastness and its isolation. These shots indicate and show a depressing, stark place. The use of moving shots while the bus is turning in the corner as we see The Shawshank prison for the first time and the high angle camera shots of the Shawshank prison are some other examples which gives us further impression of strictly controlled, overwhelming and fortress like environment with Shawshank.

In addition in this sequence, the use of close up camera shots in the first “parole” of Red shows us that, within the brutality, strictly controlled environment there is a sincere, imposing and respected inmate, who allows us to view “Shawshank” honestly.

This sequence is also shaped through the use of variety of lightning, which portrays evil and dominance. This characteristics are portrayed through the use of grey, dark colors emphasizing the face that, within walls there is a permanent darkness which penetrates its brutal walls.

The language used by the inmates are also filled with slang and de-humanizing as they refer the new inmates as “Fish”. The frequent use of animal images are used to degrade one another, “ Never seen such a sorry looking bunch of maggot shit.”

The language used by the warden is also very threatening, as we sense an evil lurking within him.” I believe in two things the holy bible and discipline” When he is in fact filled with corruption.

This scene is involving as we sense through the use of many techniques that Shawshank is a place which has a controlled and degrading environment. A place which strips men of their freedom and hope.