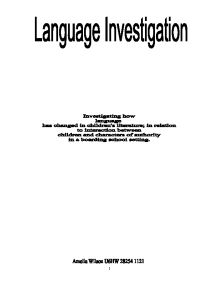 Investigating how language has changed in children's literature; in relation to interaction between children and characters of authority in a boarding school setting.

* In Malory Towers, School Girl Chums, and Harry Potter, the description is there in order to give the reader an idea of the character, through their aesthetic features. No excessive rhymes, alliteration or puns are needed which could distract from the first impression. * The authors rely on conjuring a mental image for the reader, rather than using any specific phonological features to make the extract more entertaining, for example in School Girl Chum's: "like those vivid forget-me-nots which grow by the riverside." and in Harry Potter, any phonological features are used merely to put emphasis on "Dumbledore's" bizarre appearance: "high heeled, bucked boots" 5. Graphology * Over the time periods, these extracts follow a certain pattern. The description of "The Doctor" seems to conform to the graphology that would have probably been the norm for that time period (1850's). The length of the paragraph is very different to most of the children/young adult's literature around today. Other than when there is speech, or a dramatic turn of events, most chapters comprise of just a few exceptionally long paragraphs. The extract does align with the general narrative structure, in relation to punctuation, other than the use of dashes, which seem to only appear in the earlier texts. * The extract from School Girl Chums contains similar graphology to the earlier texts, no pictures, and formulaic layout in relation to paragraphs and sentence structure. Similarly to the Tom Brown's School Days extract the paragraphs are extensive, due to the complex sentences, before line breaks. * As we move more towards later literature the length of paragraphs begins to decrease, following with the currently recognised formulaic layout. Punctuation in both Malory Towers and Harry Potter is standard, and the only noticeable similarity between this text and the older extracts is the use of "-" in place of commas or parentheses (not shown in this initial description of "Dumbledore" but present later on in the text). ...read more.

The results in Figure 2 show that over time there seemed to be a decrease in the use of adjectives in the initial descriptions. However, this was dependant on the importance of the character at that point in the book e.g. "Miss Potts" was not necessarily important immediately, so a very short description was given. Figure 4 then addressed the frequency of adjectives in the speech exchange. This demonstrates a common feature in modern literature, where fewer adjectives are used to maintain children's attention and concentration by reducing deviations from the plot line. This suggests that they rely on the content of the character's speech, enabling the reader to construct a mental image as the characters speak. In comparison to this, the older books use descriptions much more readily in between more involved exchanges, to explicitly describe the way in which the speech is being delivered. I hypothesised that there would be a greater level of familiarity between the student and authoritative character in more recent texts. In my analysis of the word count between the characters in Figure 3 it does not at first appear to support this hypothesis. On further analysis of the speech exchanges, it became clear that the initiation of the conversation, and its content gave a clearer indication of status and power within the relationship. In relation to language and gender, women tend towards the use of modal tag questions for confirmation within a conversation - however this technique was not employed by the female authoritative figures suggesting that they felt their position of power was secure. Overall, these texts do suggest a change in the use of lexical and syntactical choices in order to reflect the shifting approach of society to authoritative figures. The language used in children's literature in each time period echoes what would have been the commonly accepted dialect for both the children and teachers. The modern text demonstrates that while there is an unchanged set of cultural norms within education, how children interact and speak with authoritative figures has become less formal. ...read more.

An outstanding piece of independent research. The investigation is logically structured, the visual graphs are easy to read. The writer consistently works toward answering the questions in the hypothesis and consistently closely analyses language, form and content using a wide range of appropriate terminology to discuss various techniques. Well written and intelligently argued - this is an interesting and outstanding piece of individual research.