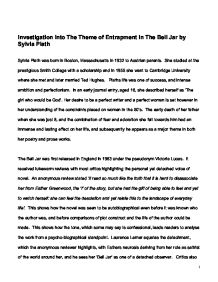 Investigation Into The Theme of Entrapment in The Bell Jar by Sylvia Plath Sylvia Plath was born in Boston, Massachusetts in 1932 to Austrian parents. She studied at the prestigious Smith College with a scholarship and in 1955 she went to Cambridge University where she met and later married Ted Hughes. Plaths life was one of success, and intense ambition and perfectionism. In an early journal entry, aged 16, she described herself as 'The girl who would be God'. Her desire to be a perfect writer and a perfect woman is set however in her understanding of the constraints placed on women in the 50's. The early death of her father when she was just 8, and the combination of fear and adoration she felt towards him had an immense and lasting effect on her life, and subsequently he appears as a major theme in both her poetry and prose works. The Bell Jar was first released in England in 1963 under the pseudonym Victoria Lucas. It received lukewarm reviews with most critics highlighting the personal yet detached voice of novel. An anonymous review stated 'it read so much like the truth that it is hard to disassociate her from Esther Greenwood, the 'I' of the story, but she had the gift of being able to feel and yet to watch herself: she can feel the desolation and yet relate this to the landscape of everyday life'. This shows how the novel was seen to be autobiographical even before it was known who the author was, and before comparisons of plot construct and the life of the author could be made. This shows how the tone, which some may say is confessional, leads readers to analyse the work from a psycho-biographical standpoint. Laurence Lerner equates the detachment, which the anonymous reviewer highlights, with Esthers neurosis deriving from her role as satirist of the world around her, and he sees her 'Bell Jar' as one of a detached observer. ...read more.

She spent lots of time making this mat, but when she is finished she just puts it on the kitchen floor for people to wipe their feet on. Esther sees this as a symbol of male oppression and the subsequent feeling that nothing a woman makes or does is of any merit. It is when around Buddy that Ether seems most repressed. This adds to the overall sense of confinement that Esther feels, but this aspect is wholly self-inflicted. One obstacle that Esther must overcome is her idealised and fairy-tale view of romantic relationships, in which she defines her and Buddys relationship in terms of a single kiss. The word 'flattened' evokes connotations like beaten, weak and subjugated. Esther is, as most women during the fifties, expected to marry. Esther Greenwood sees herself as something other than primarily a housewife, and she uses a lot of her energy to try to avoid marrying the one she is expected - Buddy Willard. The word 'bell' written 'belle' was used during the nineteenth century for the 'belle' of the ball. It was meant to be a positive term in American culture, and was used to describe a ladylike southern woman with many suitors. This was a woman who knew her role and was happy to be the desired object of her lover and to put all her energies into looking after her man and her family. In this interpretation, the 'Belle' Jar could represent societal pressure to conform to this ideal and the trapped feelings these women my encounter. Buddy is the main representation of dominant oppressive male sexuality. He stifles her intellectually, telling her a poem is just 'a piece of dust', and plays a dominant sexual role by exposing himself to her. Marco is a much more violent depiction of male sexuality, a 'woman-hater' who attempts to rape Esther. He holds power over her, he is 'invulnerable' because of his financial power and threatening sexuality, and brands her a slut. ...read more.

The ultimate chapter chiefly uses imagery of cleanliness and freedom. A 'pure, blank sheet' of snow is described, but the reader now interprets the snow as representing a fresh start. She compares forgetfulness, that may help her 'numb and cover' her memories, to 'a kind snow', allowing her freedom from her worries. When Esther readies herself to meet the board of doctors who will certify her release from the hospital, she behaves as if she is preparing for a bridegroom or a date; she checks her stocking seams, muttering to herself "Something old, something new. . . . But," she goes on, "I wasn't getting married. There ought, I thought, to be a ritual for being born twice - patched, retreaded, and approved for the road, I was trying to think of an appropriate one. . . ." Critics who have been willing to see a reborn Esther have generally done so without ever questioning the appropriateness of the reference to a "retread" job. Susan Coyle writes that the tire image "seems to be accurate, since the reader does not have a sense of Esther as a brand-new, unblemished 'tire' but of one that has been painstakingly reworked, remade". Linda Wagner, for example, ignores this passage and concentrates on subsequent paragraphs, where the image of an "open door and Esther's ability to breathe are," Wagner writes, "surely positive images." The ability the breathe serves as a contrast to the 'sour air' under the Bell Jar. There is no doubt that the novel has a fairly high level of closure with most possibilities eliminated. The reader also knows that she had children, we become aware of this very early on in the construct of the story, so Esther obviously settles down into some sort of domesticity. Plath does not concede that Esther is fully cured, Esther even finally wonders whether she may be trapped by the bell jar again, but the novel concludes on a very optimistic note; that Esther is feel from the constraints that she previously felt. 4181 words 1 1 ...read more.