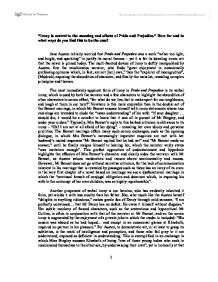 "Irony is central to the meaning and effects of Pride and Prejudice." How far and in what ways do you find this to be the case? Jane Austen initially worried that Pride and Prejudice was a work "rather too light, and bright, and sparkling" to justify its moral themes - yet it is for its dazzling ironic wit that the novel is prized today. The multi-faceted device of irony is deftly manipulated by Austen: first the mischievous narrator, who finds "great enjoyment in occasionally professing opinions which, in fact, are not [her] own," then the "explorer of incongruities", (Mudrick) exposing the absurdities of character, and finally the moralist, revealing complex principles and themes. The most immediately apparent form of irony in Pride and Prejudice is its verbal irony, which is used by both the narrator and a few characters to highlight the absurdities of other characters to comic effect, "for what do we live, but to make sport for our neighbours, and laugh at them in our turn?" Nowhere is this more enjoyable than in the double act of the Bennet marriage, in which Mr Bennet amuses himself with ironic statements whose true meanings are intended to elude the "mean understanding" of his wife: "if your daughter ... ...read more.

The art of "feigned ignorance" - appearing to miss the point but in fact delivering a shrewd insight - is one of which Austen is a master. Thus irony is not only a tool to understanding, but as Mudrick proposes, a weapon against stupidity - and (for it is both more subtle and less aggressive than direct male confrontation) a woman's weapon, utilised to great effect by Austen. A feminist reading could view irony as an empowering device, its oblique nature enabling Austen and her heroine to target the upper class in a way that a young woman of the gentry could not more explicitly do. Elizabeth uses her natural "quickness" to politely evade Lady Catherine's interrogations (suspecting herself "to be the first creature who had ever dared to trifle with so much dignified impertinence"), and her "playful disposition" to tease Darcy, a man of many times her "consequence". Here the feminine weapon of irony has a flirtatious edge, for "having rather expected to affront him", Elizabeth's "sweetness and archness of manner" inadvertently makes it "difficult for her to affront anybody; and Darcy had never been so bewitched by any woman as he was by her." As an intrinsic part of a comedy of manners, mockery of the upper classes is also achieved by narrative irony as Austen satirises the affectations and manners of many social groups. ...read more.

Dramatic irony (the reader's knowledge over that of a character) serves a double purpose: as a narrative device to aid suspense and conflict, and to highlight the self-deception of the protagonist. Just as in the Greek tragedies in which dramatic irony became common, in Pride and Prejudice the perceptive reader is, from various narrative and character hints, aware of Darcy's attraction, of the dangers of Jane's excessive modesty, and most importantly of the true natures of Darcy and Wickham. From Elizabeth's viewpoint do we see her dismiss Jane's, Charlotte Lucas's, Miss Bingley's and Mrs Gardiner's advice on the subject, all the while priding herself on her quick judgment and believing herself a "studier of character". Only upon reaching the "resolution" stage of the dramatic irony - her epiphany in discovering that "she had been blind, partial, prejudiced, absurd" - does she begin to develop as a character, and overcome the titular pride and prejudice. Austen's irony has many faces: dramatic and situational irony which contributes structure, irony as a powerful weapon against class hypocrisy, and irony as "the instrument of moral vision" (Wright) in exposing character flaws. Finally, there is the signature irony of Austen: the double-edged sword of verbal irony, relished for its "humour tinged with cruelty", and its two-fold meaning, the second of which must be divined by the perceptive reader: "I leave it for yourself to determine." ?? ?? ?? ?? 1 ...read more.