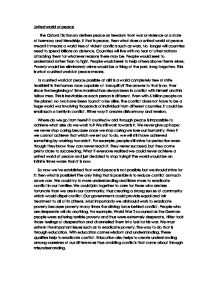 Is a united world at peace possible at all? Is a world completely free of strife feasible?

United world at peace The Oxford Dictionary defines peace as freedom from war or violence or a state of harmony and friendship. If that is peace, then what does a united world at peace mean? It means a world free of violent conflicts such as wars. No longer will countries need to spend billions on defence. Countries will live with no fear of other nations attacking them for whatever reasons there may be. People would seek to understand rather than to fight. People would seek to help others above themselves. Poverty would be eliminated; crime would be a thing of the past, long forgotten. ...read more.

If a united world through peace is impossible to achieve what else do we work to? We still work towards it. We never give up hope; we never stop caring because once we stop caring we lose our humanity. Even if we cannot achieve that which we set out to do, we will still have achieved something by working towards it. For example, people still strive for perfection even though they know they can never reach it. They never succeed, but they come pretty close to succeeding. What if everyone realized we could never achieve a united world at peace and just decided to stop trying? ...read more.

Hitler took those feelings of desperation and channelled them into fuel for his war. We must unite in the important issues such as to eradicate poverty. The way to do that is through education. With education comes wisdom and understanding. These qualities help to eradicate conflict. Education also helps to create understanding among ourselves of our differences thus avoiding conflicts that come about through misunderstanding. In conclusion, let us start to strive for peace by first diffusing the conflict we have in our own families before trying for world peace. Seek to understand and not to judge. Stop to hear people out before reacting. If even half of the families in the world tried to do that, the earth would be a much more peaceful place to live. ...read more.