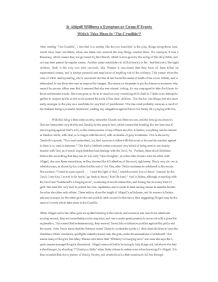 Is Abigail Williams a Symptom or Cause of Events Which Take Place in 'The Crucible'?

Is Abigail Williams a Symptom or Cause if Events Which Take Place in 'The Crucible'? After reading 'The Crucible', I feel that in a society like the one described in the play, things along those lines would have been inevitable, when one takes into account the way things worked there. For example, it was a theocracy, which means they are governed by the Church, which in turn goes by the ruling of the Holy Bible, and not any laws passed by regular means. Another major contributor to all this tension is the fact that out of the eight children, Ruth is the only one who survived. Mrs Putnam is convinced that they have all been killed by supernatural means, and is always paranoid and suspicious of anything out of the ordinary. This means when the cries of witch start spreading, she is convinced she has at last found the cause of death of her seven infants, and is determined to see those she sees as responsible hanged. She seems so desperate to pin the blame on someone who cannot be proven either way that it seemed that she was almost looking for any scapegoat to take the blame for those unfortunate events. She even goes as far as to send her only remaining child Ruth to Tituba in an attempt to get her to conjure spirits so she could contact the souls of her dead children. ...read more.

When Abigail and a few other girls are spotted dancing in the woods, and someone was seen to be naked and running around, they are immediately under suspicion, and were under great pressure to come out with a plausible explanation. This meant that instantaneously, they were all forced into a defensive position against the public and the courts. After Parris learns that the Putnams asked Tituba to contact the spirits of their dead children to learn the identities of their murderers, spotlights instantly turned onto the girls, under the accusations of witchcraft. This scares many of the girls like Mary Warren who know that 'Witchery's a hanging error' and once she says that, panic ensues amongst the girls themselves. Abigail seems at first to be trying to help things out, but shows she had a short temper, by shouting 'I'll beat you Betty' when Betty refuses to waken even when knowing it's Abigail. It is then revealed that she is jealous of Goody Proctor, and drank blood on that occasion to kill her through supernatural means, but then threatens to kill anyone who dared to reveal this. This threat has come directly out of her fear of the punishment she will no doubt receive in such a theocratic society, making her the cause of this particular dramatic event, but only as a result of the type of society Salem is in the play, and therefore she is actually a symptom. ...read more.

These latter accusations, needed no provocation from Abigail, but took course all by themselves, suggesting that Abigail was not at the centre of any of those events. So to conclude, my opinion is that Abigail is not entirely the symptom nor the cause of events in Salem, but acted as more of a catalyst, speeding up and making what was inevitable considering the society which Salem was, into reality, in a rather dramatic way. If I were however, to seem things as black and white as the people of Salem did, I would consider Abigail to be more of a symptom than a cause, mainly because after carefully studying the theocratic society where people were getting overly jealous of each other, something along these lines almost seemed to be destined. Also, the frightening power of the majority is able to suppress the minority who feel rather sceptical and are not convinced by the evidence may themselves be accused of being 'against the court' and receive punishment. This would mean standing up for their beliefs which in this case would have been correct would mean they would have lost their lives. So considering the circumstances of the rather extreme philosophical and religious guidance which plays such a huge role in the settlers of Salem, and the fact that Abigail was able to put a leash on things to direct it in a direction which benefited her does not make her a symptom either, just a catalyst in an equation with all the ingredients for such a terrible tragedy. ...read more.