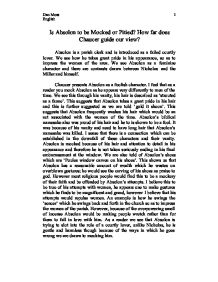 Is Absolon to be mocked or pitied?

Is Absolon to be Mocked or Pitied? How far does Chaucer guide our view? Absolon is a parish clerk and is introduced as a failed courtly lover. We see how he takes great pride in his appearance, so as to impress the women of the area. We see Absolon as a feminine character and there are contrasts drawn between Nicholas and the Miller and himself. Chaucer presents Absolon as a foolish character. I feel that as a reader you mock Absolon as he appears very differently to men of the time. We see this through his vanity, his hair is described as 'strouted as a fanne'. This suggests that Absolon takes a great pride in his hair and this is further suggested as we are told 'gold it shoon'. This suggests that Absolon frequently washes his hair which would be an act associated with the women of the time. ...read more.

As a Parish Clerk Absolon is initially presented as a man whom you would expect commands respect, Absolon however is quickly shown to be a man who is shown none as even though John is aware of Absolon's advances he does not feel threatened by them and even laughs that he would to coax John's wife from him. Though he holds a religious post Absolon appears not to be religious. When in church the mind is supposed to be on god and not to wander, however we know that Absolon is trying to impress during services as Chaucer describes him as 'a gay surplis'. Though he is in church Absolon still appears to be trying to advertise his vivacity. AS a 'Parish clerk' Absolon is also committing sins for trying to have sex altogether. As a man of god he is supposed to refrain from such acts and to remain celibate so that no-one may come between him and god. ...read more.

We also see a comparison drawn between Nicholas and Absolon with the Miller. The Miller plays an extremely large set of bags and pipes which appear to dwarf that of Nicholas also. As in the 'Canterbury Tales' it is a great feature that the Miller is an exceptional bagpipe player then I believe that it is the Miller's character that has created this comparison between Absolon, Nicholas and himself. The Miller is a strong man and though he is not crude enough to show the gathering in front of him he wishes to show that he is larger than both men. Chaucer presents Absolon as a failure. We mock Absolon a solely because of the way Chaucer has presented him; however, if the tale were to be told from a sympathetic angle then we would pity Absolon. Chaucer does guide us through his intricate use of language. He insults, ridicules and mocks Absolon in a way in which we find ourselves obliged to laugh. ?? ?? ?? ?? 1 Dan Moss English ...read more.