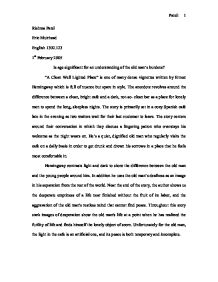 Is age significant for an understanding of the old man's burdens?

Rishma Patel Eric Muirhead English 1302.123 1st February 2005 Is age significant for an understanding of the old man's burdens? "A Clean Well Lighted Place" is one of many dense vignettes written by Ernest Hemingway which is full of nuance but spare in style. The anecdote revolves around the difference between a clean, bright cafe and a dark, not-so- clean bar as a place for lonely men to spend the long, sleepless nights. The story is primarily set in a cozy Spanish cafe late in the evening as two waiters wait for their last customer to leave. The story centers around their conversation in which they discuss a lingering patron who overstays his welcome as the night wears on. He's a quiet, dignified old man who regularly visits the cafe on a daily basis in order to get drunk and drown his sorrows in a place that he feels most comfortable in. Hemingway contrasts light and dark to show the difference between the old man and the young people around him. ...read more.

The only hope left, as drunk as he is, is that he may pass out when he arrives home. One can infer from the author's language that the younger of the two waiters is obviously impatient with the old man; he just wishes the customer would stop drinking and go home, so that he can go home too. His impatience disillusions him from seeing the importance of the cafe to the old man's survival. He cannot comprehend and relate to the reasoning as to why the old man nurses so many drinks over so long a period, night after night, in the quiet cafe. He particularly can't fathom what could have led the old man to attempt suicide, because the old man 'has plenty of money,' and the young waiter cannot imagine a source of despair any more profound than a shortage of ready cash. Furthermore, the author deliberately emphasizes the younger waiter's disgust for the old man as he says, "I wouldn't want to be that old. ...read more.

To escape contemplating about his loneliness he seeks refuge away from the darkness in his home away from home, his cafe. The essence that makes this story significant is the way that the author manages to evoke the universal and timeless dichotomy between the young waiter, who, with his whole life ahead of him, is 'all confidence' and the elderly patron of the cafe who realizes there is literally nothing to live for. The pivotal character here is the older waiter, who, unlike the young waiter, realizes that the world is 'nada and pues nada' (nothing and more nothing), but who nonetheless has the stoicism to keep on living. This story is filled with images of despair. The contrasts between light and dark, youth and age are harsh and well defined. The reader leaves the story with a feeling that there is no escape from the doldrums of the winter years of life. Perhaps it is Hemingway's own terror of old age and infirmity that he is trying to communicate to the reader. 1 Patel: ...read more.