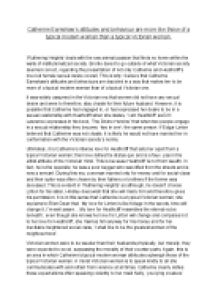 Is Catherine Earnshaw a Typical Victorian Woman or a Modern Woman?

﻿Catherine Earnshaw?s attitudes and behaviour are more like those of a typical modern woman than a typical Victorian woman. ?Wuthering Heights? deals with the raw animal passion that finds no home within the walls of institutionalized society. Bronte dared to go outside of what Victorian society deemed correct, regarding the presentation of not only Catherine and Heathcliff's love but female sexual desire overall. This is why I believe that Catherine Earnshaw's attitudes and behaviours are depicted in a way that makes her to be more of a typical modern woman than of a typical Victorian one. It was widely assumed in the Victorian era that women did not have any sexual desire and were to therefore, stay chaste for their future husband. However, it is possible that Catherine had engaged in, or had expressed her desire to be in a sexual relationship with Heathcliff when she states, ?I am Heathcliff? as D.H. Lawrence expresses in his book, ?The Divine Heroine? that when two people engage in a sexual relationship they became, ?two in one?; the same person. ...read more.

A moral Victorian woman is to speak kindly to all she communicates with and refrain from violence at all times. Catherine clearly defies these expectations often speaking violently to her maid Nelly, ?you lying creature? and exhibiting physical violence toward her also, she ?snatched the cloth from my hand, and pinched me, with a prolonged wrench?. In addition to this, Catherine?s immorality is exposed via her daring to love two men and in making little effort to conceal her feelings for Heathcliff from her husband by inviting him over often and upon seeing him allowed her cheeks to, ?glow? and, flinging her arms around her husband?s neck and exclaimed, ?Heathcliff's come back- he is!?. Catherine?s behaviour displayed here is far off the mark of Victorian morality as each woman is to give herself to her husband completely and devote her life to enhancing his. It was a wife?s duty to take care of all the domestic chores around the house and raise any of their daughters to take after their mothers in being the perfect wife. ...read more.

It is her power and dominancy that makes her more a typical modern woman than a typical Victorian one. Among these attributes, Catherine has a fiery temper and makes it known to all who disagree with or infuriate her. This makes her very much an atypical Victorian woman and allows her to fall again into the typical modern woman category as before Freud?s research, women in particular were to repress their emotions and refrain from speaking about themselves, however, Freud?s research concluded that the act of repression was the root cause for many mental and physical illnesses and from then forth, it was recommended that people expressed their feelings as Catherine has evidently shown may times throughout the novel. Ellen Dean, Catherine's maid describes her as a ?haughty? headstrong character. It is clear that although she tries to conform to society?s norms during her time at Thrushcross Grange, Catherine simply wishes to be free and happy on the moors and be liberated from a world full of social judgement. Whether she has born or bred this way, it is clear that Catherine does not fit into the mould of a typical Victorian woman. ...read more.