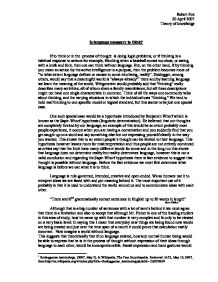 Is language necessary to think?

Is language necessary to think? If to think or in the process of thought is doing logic problems, or if thinking is a habitual response to actions for example, flinching when a baseball comes too close, or eating with a knife and fork, then one can think without language. But, on the other hand, if by thinking you mean an action by the active intelligence to a purpose, then the problem becomes more of "to what extent language defines or causes to come into being, reality". Heidegger, among others, would say that a meaningful world is "always-already"1 there and by learning language we learn the meaning of the world. Wittgenstein would probably add that "thinking" really describes many activities, all of whom share a family resemblance, but all these descriptions might not have one single characteristic in common. Think of all the ways one commonly talks about thinking, and the varying situations in which the individual uses "thinking." We tend to hold real thinking to one specific model or logical standard, but this seems to be just one special case. One such special case would be a hypothesis introduced by Benjamin Whorf which is known as the Sapir-Whorf hypothesis (linguistic determination). ...read more.

Keeping this idea in mind, it is fair to say with some doubt that language is not needed to think. An attempt to explain this very point would be the idea of people experiencing thought process without them knowing themselves. A very clear example of this is the idea of dreaming no matter which type of it dream its may be, lucid, nightmare or day dreaming. These dreams are very often not linked to language therefore suggesting that a person can think without the use of language. This leaves error from my analysis because humans are always in a sub-conscious state when experiencing these dreams and this suggest that it is not entirely factual evidence that no language is experienced in the dream. I created a good experiment to understand this idea a few days ago. Imagine you feel the urge to urinate. You go to the bathroom, unzip your pants, sit on the toilet (works for both females and males), and urinate. Afterward, you turn the tap on, wash your hands and then you dry them. Were you thinking in language about any of the above while you were doing them? ...read more.

there is a very important need for language as both subjects need advanced language to achieve the desired results. Although there is a need is does not prove that language is necessary for thought, it merely proves that language is necessary for development and understanding as discussed earlier. Overall language can be concluded to be not needed to think, however language is needed when humans wants to communicate, develop and understand their complex thought. Language can be considered a limitation of thought but also without it there would be very slow or no development. Doing activities that involve actions or visual experiences e.g. sport and art deal less with language and so language is not necessary. Thoughts can be created both consciously and sub-consciously but we cannot determine for sure if in our sub-conscious state that we think in images not language. The exploration of language and thought linked together will not be resolved but people can come to decent summations of what both arguments are saying. Language is needed to think but it is considered necessary to communicate thought. Thought is experienced whether or not language is involved. Word count : 1542 1 Heideggerian terminology. (2007, May 3). In Wikipedia, The Free Encyclopedia. Retrieved 16:52, May 10, 2007, from http://en.wikipedia.org/w/index.php?title=Heideggerian_terminology&oldid=128050369 ?? ?? ?? ?? Robert Fox 30 April 2007 Theory of knowledge ...read more.