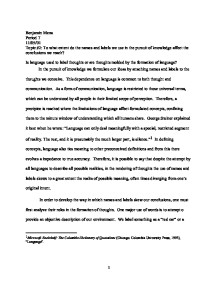 Is language used to label thoughts or are thoughts molded by the formation of language?

Benjamin Meza Period 7 11/05/01 Topic #2: To what extent do the names and labels we use in the pursuit of knowledge affect the conclusions we reach? Is language used to label thoughts or are thoughts molded by the formation of language? In the pursuit of knowledge we formulate our ideas by attaching names and labels to the thoughts we conceive. This dependence on language is common to both thought and communication. As a form of communication, language is restricted to those universal terms, which can be understood by all people in their limited scope of perception. Therefore, a precipice is reached where the limitations of language affect formulated concepts, confining them to the minute window of understanding which all humans share. George Steiner explained it best when he wrote: "Language can only deal meaningfully with a special, restricted segment of reality. The rest, and it is presumably the much larger part, is silence."1 In defining concepts, language also ties meaning to other preconceived definitions and from this there evolves a impedance to true accuracy. Therefore, it is possible to say that despite the attempt by all languages to describe all possible realities, in the rendering of thoughts the use of names and labels skews to a great extent the realm of possible meaning, often times diverging from one's original intent. ...read more.

Empedocles reconciled the three aforementioned diverging theories by making earth, water, air, and fire the primordial elements.4 This conclusion arrested the progress of science for many years until Mohammedan alchemists in the search for a way to transmute base metals into gold, began to discover elements for which no names existed.5 Only later when the first "chemists" began to define such base concepts with new vocabulary, did a deeper understanding of chemistry emerge. The idea that language is essential to thought has been approached from the fictional field also. In his novel, 1984, George Orwell developed an entirely new language called "newspeak." The premise for newspeak was a language which could be strictly regulated and which would not permit the conception of revolutionary ideas. For example: "the word goodthink, meaning, very roughly, 'orthodoxy,' or, if one chose to regard it as a verb, 'to think in an orthodox manner.'"6 In this manner, not only did Orwell create new words but simplified the concepts which the Ingsoc government (New "English Socialist" totalitarian Order) deemed acceptable, making it easier for the expression of orthodox ideas and impossible for revolutionary ones. ...read more.

In this instance it is the difference in cultural and geographic conditioning that confuses the transmission of ideas, or even accurate illustrations of objective reality. The goal of each area of knowledge and medium of communication is to assign more accurate names and labels to loftier and more obtuse concepts. A mathematical or scientific representation of, "it is a hot day" may seek to find the objective reality by reducing the level of relativism. This would be done by assigning a number to the temperature of the day: "It is 80?F outside." Even in a scientific representation, however, one may describe the temperature as 26.67?C or 299.82K, with each being completely accurate but associated with a different reference point: Fahrenheit with freezing point of salt water; Celsius with freezing point of distilled water; and Kelvin with absolute zero. Artists could try to illustrate the heat of the day by painting a canvas with reds and oranges like fire. There are an infinite number of ways to represent an infinite number of shades of the same idea. In every case, there exists a direct correlation between the labels and names we give concepts, and, the conclusions we reach from using different labels and names. ...read more.