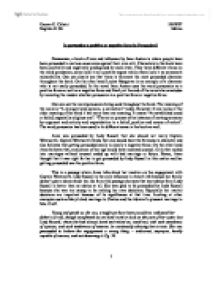 Is persuasion a positive or negative force in Persuasion?

Is persuasion a positive or negative force in Persuasion? Persuasion, a book of love and influence by Jane Austen is where people have been persuaded in various cases even against their own will. Characters in the book have been positively and negatively predisposed by each other. They have different views on the word persuasion; some look it as a positive aspect while others look it as someone's vulnerability. One can clearly see that Anne is foremost the most persuaded character throughout the book. On the other hand Louisa Musgrove is an example of a character who is not easily persuaded. In the novel Jane Austen uses the word persuasion as a positive force as well as a negative force and finally at the end of the novel she concludes by revealing the readers whether persuasion is a positive force or negative force. One can see the word persuasion being used throughout the book. The meaning of the word is "A strongly held opinion; a conviction" today. ...read more.

kind word or look on the part of her sister; but Lady Russell, whom she had always loved and relied on, could not, with such steadiness of opinion, and such tenderness of manner, be continually advising her in vain. She was persuaded to believe the engagement a wrong thing -- indiscreet, improper, hardly capable of success, and not deserving it. Pg. 56. She did not blame Lady Russell, she did not blame herself for having been guided by her; but she felt that were any young person, in similar circumstances, to apply to her for counsel, they would never receive any of such certain immediate wretchedness, such uncertain future good. She was persuaded that under every disadvantage of disapprobation at home, and every anxiety attending his profession, all their probable fears, delays, and disappointments, she should yet have been a happier woman in maintaining the engagement, than she had been in the sacrifice of it; and this, she fully believed, had the usual share, had even more than the usual share of all such solicitudes and suspense been theirs, without reference ...read more.

Anne wondered whether it ever occurred to Captain Wentworth now, to question the justness of his own previous opinion as to the universal felicity and advantage of firmness of character; and whether it might not strike him that, like all other qualities of the mind, it should have its proportions and limits. She thought it could scarcely escape him to feel that a persuadable temper might sometimes be as much in favor of happiness, as a very resolute character. Pg. 136. Last but not least, I would like to conclude by agreeing with Jane Austen that one should not be persuaded easily but one should always have an open mind towards other people's suggestion. One does not have a firm character just because he/she does not get easily persuaded, but one should realize when to listen to someone and when to ignore them. One should make up one's mind depending on the situation, which I believe is the moral of the novel. Word count: 1,072 Gaurav G. Chhetri 5/9/2007 English A1 SL Melina 1 ...read more.