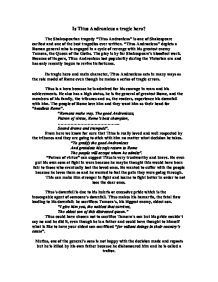 Is Titus Andronicus a tregic hero

Is Titus Andronicus a tragic hero? The Shakespearian tragedy "Titus Andronicus" is one of Shakespeare earliest and one of the best tragedies ever written. "Titus Andronicus" depicts a Roman general who is engaged in a cycle of revenge with his greatest enemy Tamora, the Queen of the Goths. The play is by far Shakespeare's bloodiest work. Because of its gore, Titus Andronicus lost popularity during the Victorian era and has only recently begun to revive its fortunes. Its tragic hero and main character, Titus Andronicus acts in many ways as the role model of Rome even though he makes a series of tragic errors. Titus is a hero because he is admired for his courage in wars and his achievements. He also has a high status, he is the general of greatest Rome, and the members of his family, the tribunes and us, the readers, experience his downfall with him. The people of Rome love him and they want him as their head for "headless Rome". "Romans make way. ...read more.

Titus could have chosen not to sacrifice Tamora's son but his pride couldn't say no and he did it, even though he is a father and could have thought to himself what is like to have your eldest son sacrificed "for valiant doings in their country's cause". Mutius, one of the general's sons is not happy with the decision made and reposts but he is killed by his own father because he dishonoured him and he is called a traitor. At the sight of this, Saturninus made another opinion about Titus's family and says: "No, Titus, no, the Emperor needs her not,(about Lavinia) Nor her, not thee, nor any of thy stock. I'll trust by leisure him that mocks me once, Thee never, not thy traitors haughty sons, Confederates all thus to dishonour me." We see that Titus's downfall had already started and Tamora's plans are going as planned. Saturninus changed his mind about the marriage with Lavinia at the sight of Tamora and exclaims: "A goodly lady, trust me, of the hue That I would choose were I to choose anew". ...read more.

As a part of his revenge, Titus cooked Tamora's sons, Martius and Quintus, in the pie. After Titus has the pleasure to tell Tamora that she just had a portion of her sons, he kills her. We see that Titus got his revenge in the end and even though he knew he would get killed if he murdered Tamora he still does it because he has nothing else to lose now that almost all of his sons are dead and his dearest Lavinia washed of her shame. He acts indifferently and stabs the empress. This leads to what he expected. But soon after that, Titus is killed by the emperor because of it and the emperor is killed by Lucius because he couldn't behold his father bleed. At the end of the play, we fell sorry for Titus and we get overwhelmed with compassion for him and for the suffering of others. In the end, Titus Andronicus is a tragic hero because he is the main character in a tragic play in which great suffering, destruction and distress happened. ...read more.