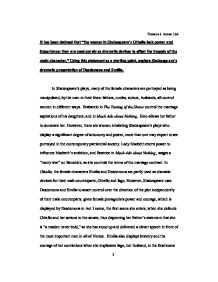 It has been claimed that the women in Shakespeare(TM)s Othello lack power and importance; they are used purely as dramatic devices to offset the tragedy of the main character. Using this statement as a starting point, ex

Florence J. Annan L6A It has been claimed that "the women in Shakespeare's Othello lack power and importance; they are used purely as dramatic devices to offset the tragedy of the main character." Using this statement as a starting point, explore Shakespeare's dramatic presentation of Desdemona and Emilia. In Shakespeare's plays, many of the female characters are portrayed as being manipulated, by the men in their lives: fathers, uncles, suitors, husbands, all control women in different ways. Brabantio in The Taming of the Shrew control the marriage aspirations of his daughters, and in Much Ado about Nothing, Hero allows her father to dominate her. However, there are women inhabiting Shakespeare's plays who display a significant degree of autonomy and power, more than one may expect to see portrayed in the contemporary patriarchal society. Lady Macbeth exerts power to influence Macbeth's ambition, and Beatrice in Much Ado about Nothing, wages a "merry war" on Benedick, as she controls the terms of the marriage contract. In Othello, the female characters Emilia and Desdemona are partly used as dramatic devices for their male counterparts, Othello and Iago. However, Shakespeare uses Desdemona and Emilia to assert control over the direction of the plot independently of their male counterparts. ...read more.

to escape Othello's displeasure, possibly in order to show to the audience that Othello has so unjustly accused her of lying about having an affair. Therefore, she is yet again a character in her own right not just a dramatic device. Desdemona's dynamic character and her transition from the strong willed confident girl, speaking before the senate, to the submissive, passive wife she later becomes, serve to display the many facets of the character Shakespeare has created. She refuses to blame Othello for his cruelty towards her and instead of being merely subservient, I believe that Shakespeare creates a character that is too na�ve, refusing to accept a bad opinion of the husband she chose over all the "suitors in Venice." She states that "to his honour and valiant parts, did I my soul and fortunes consecrate" displaying that she is forsaking all her worldly goods and even her soul in order to be his wife. Her naivety is also evident because, although she seems to trust Emilia implicitly, Shakespeare makes her blind to the obvious jealousy that Emilia tries to indicate by saying "is this man not jealous?" to which her reply is that "the sun where he was born drew out all such humors from him." ...read more.

thus, Shakespeare has used the women to reinforce the idea that Desdemona is incapable of committing the charges brought against her, and an even greater sense of injustice is created with her death. This scene also allows the audience to think about the nature of infidelity, as the argument Emilia puts forth is very strong: "not for dresses or trinkets, but the whole world is a big thing." Shakespeare uses Emilia and Desdemona throughout the play as dramatic devices, as any character in a play is a dramatic device. They are present to move the story along and heighten the sense of drama. By Shakespeare allowing Desdemona to die and using her last breath to absolve Othello, she allows him to die a tragic hero's death. By Shakespeare using Emilia to implicate Iago, then it allows justice to be served, and for Othello to see the atrocity which Iago has committed. Shakespeare uses the women as a contrast not only to each other but also to the men in the play, as they act with integrity and die nobly. Desdemona and Emilia are not just purely dramatic devices use3d to offset Othello's personal tragedy, they are independent characters in their own right and this is shown by Shakespeare's dramatic presentation of them throughout the play. ...read more.