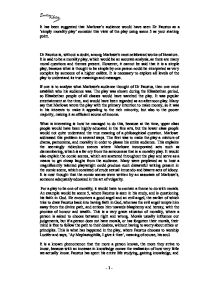 It has been suggested that Marlowe's audience would have seen Dr Faustus as a 'simply morality play' consider this view of the play using scene 5 as your starting point.

It has been suggested that Marlowe's audience would have seen Dr Faustus as a 'simply morality play' consider this view of the play using scene 5 as your starting point. Dr Faustus is, without a doubt, among Marlowe's most celebrated works of literature. It is said to be a morality play, which would be an accurate analysis, as there are many moral questions and themes present. However, it cannot be said that it is a simple play, because what is thought to be simple by one person could be interpreted as very complex by someone of a higher calibre. It is necessary to explore all levels of the play to understand its true meanings and messages. If one is to analyse what Marlowe's audience thought of Dr Faustus, then one must establish who his audience was. The play was shown during the Elizabethan period, so Elizabethan people of all classes would have watched the play. It was popular entertainment at the time, and would have been regarded as an afternoon play. Many say that Marlowe wrote the play with the primary intention to make money, so it was in his interests to make it appealing to the rich minority, but also to the poorer majority, making it an efficient source of income. What is interesting is how he managed to do this, because at the time, upper class people would have been highly educated in the fine arts, but the lower class people would not quite understand the true meaning of a philosophical question. ...read more.

In the end however, Mephastophilis brings fire to melt Faustus' blood, and the contract is signed. It is easy to see that this act will entail serious consequences and moral repercussions. Faustus sells his soul in order to have all the knowledge he wishes, and even have Mephastophilis wait on him hand and foot for a period of twenty-four years. His sheer hubris is what leads to his downfall, and he only realises that he has made a mistake when it is too late to repent, or at least that is what he thinks. To say that the play is simplistic is a one sided view of it. To different audiences, the play will have different effects. Those who are educated in the subject will be able to interpret the deeper meanings of the themes and messages put across. On the other hand, those lacking the intelligence to decipher hidden meanings will simply enjoy the play on one level, laughing occasionally at some crude joke or pantomime act. The entire play is an allegory, for example, when Wagner takes one of Faustus' books and summons spirits from h**l demanding that the clown be his servant. On one level, it seems that Wagner is simply toying in something he does not know about, but on a more profound level, he is displaying how as you go lower down the hierarchy, you still see characteristics of those at the top with the most knowledge. ...read more.

The play fiercely criticises Christianity and Judaism and challenges the morals of religious people, but of course, all glory is fleeting, and Faustus eventually succumbs to his own want for power. Power that he never had because of his desire to impress those above him in the hierarchy. He is seen to be performing errands for people, such as the Duchess in scene 11 for whom he sends Mephastophilis to the Far East to fetch grapes, in order to be rewarded. A fitting analogy for the behaviour of Faustus would be a dog performing tricks for treats. To say that the play is simple, however, is a very one sided view, and the play must be analysed with a sharper eye and mind in order to pick up on the messages that work on many levels at the same time. I do not agree that the play is simple because I have seen and understood the different levels of the play, but to someone who has little understanding and appreciation of the themes, it would indeed be a simple play. Some parts of Marlowe's audience would agree with the suggestion that Dr Faustus is a simple morality play, but others may not. In effect, Marlowe has exhibited a complicated theme in a simple manner, yet he has riddled it with hidden meanings so that everyone, regardless of class, will be entertained by his allegorical masterpiece - 1 - ...read more.

The writer has indeed attempted to define and direct their answer at the question, however, especially in the early part of the essay, the answer is a little general, and would improve if backed up by more referencing. Unfortunately, the ...

The writer has indeed attempted to define and direct their answer at the question, however, especially in the early part of the essay, the answer is a little general, and would improve if backed up by more referencing. Unfortunately, the question perhaps featured an error in calling the play a 'simply morality play' when it probably meant 'simple.' It was also maybe a mistake to totally separate the terms 'simple' and 'morality play' in answering the question.

Although, admirably, the writer has attempted to integrate context of production and reception into their answer, their comments were very general, and lacked in depth analysis. An example would be when they reference 'the lower class' people, and their possible lack of understanding regarding philosophy - a sweeping generalization. On a more positive note, language was discussed in the essay, and a clear sense of a variety of different interpretations was also present, which has broadened the essay's perspective.

The grammar and spelling in the essay was on the whole strong, however there were far too many paragraphs, meaning the essay didn't flow as well as it could've done. The writer shows a clear awareness of the fact that Marlowe has created the play, and that the characters aren't real people, through their referencing of the audience's reception. A more sophisticated range of vocabulary might make the essay more compelling for an examiner, which might lead to higher marks!