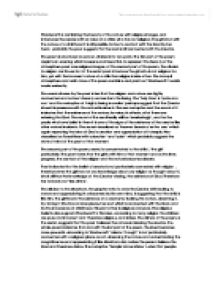 It Is a beautous evening calm and free

Wordsworth is combining the beauty of the nature with religious images, and introduces the reader with an idea of a child, who has not religious thoughts but with the nature of a childhood it is still possible for her to contact with the God by her heart, probably the poet suggests that her soul is still connected with the Creator. The poem is structured as sonnet, divided into two parts. The first part of the poem depicts an evening which is serene and beautiful, to represent the beauty of the atmosphere poet uses religious images, at the second part of the poem, the allusion to religion continues, but at the sestet poet introduce the girl who is not religious for him, yet with the innocent nature of a child has religion inside of her. ...read more.

The sunset described as 'heaven broods o'er the sea' which again repeating the idea of God's creation and appreciation of it deeply. Nun described as 'breathless with adoration' and 'quiet' which probably suggests the state of mind of the poet at that moment. The second part of the poem, sestet, is concentrated to the child, 'the girl' particularly. The poet states that the girl is with him at that moment and as the lines progress, the contact of the religion and the nature becomes clearer. Poet indicates that the belief of creator is not particularly connected with religion, therefore even the girl has not any knowledge about any religion or thought about it, she is still has the knowledge of the Creator's being, the existence of God. ...read more.

The metaphor 'Temple's inner shrine' refers that people pray and love the creator with their heart, and with the last line this metaphor is continued, other poeple thinks that the God is not with her however she is always with creator deep down and people do not conceive this. The poem is structured as sonnet, which is exist of an octat and sestet, the first part explainf the thought of Wordsworth about religion and nature, the latter depicts the girl's part at the thoughts of Wordsworth. The rhyme scheme abbcaaacc and dccdce emphasises the idea of tranquil nature and its relationship with religion, it sounds calm and serene, at last lines, the rhyme on 'divine' and 'shrine' draws the words together in meaning as in sound. ...read more.