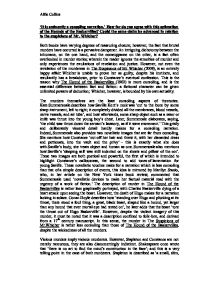 It is eminently a consoling narration. How far do you agree with this estimation of the Hounds of the Baskervilles? Could the same claim be advanced in relation to the suspicions of Mr. Whicher?

'It is eminently a consoling narration.' How far do you agree with this estimation of the Hounds of the Baskervilles? Could the same claim be advanced in relation to the suspicions of Mr. Whicher? Both books have varying degrees of reassuring closure; however, the fact that brutal murders have occurred is a pervasive dampener. An intriguing dichotomy between the inhumane, on the one hand, and the comeuppance on the other, is a fact often overlooked in murder stories; wherein the reader ignores the atrocities of murder and only experiences the exultations of revelation and justice. However, not even the revelation of the murderess in The Suspicions of Mr. Whicher (2008), is an entirely happy affair: Whicher is unable to prove her as guilty, despite his instincts, and resultantly has a breakdown, prior to Constance's eventual confession. This is the reason why The Hound of the Baskervilles (1902) is more consoling, and is the essential difference between fact and fiction: a fictional character can be given unlimited powers of deduction; Whicher, however, is bounded by his own actuality. The murders themselves are the least consoling aspects of the stories. Kate Summerscale describes how Saville Kent's neck was 'cut to the bone by some sharp instrument, left to right; it completely divided all the membranes, blood vessels, nerve vessels, and air tube', and how afterwards, some sharp object such as a razor or knife was thrust into the young boy's chest. Later, Summercale elaborates, saying, 'the child was thrust down the servant's lavatory, as if it were excrement.' ...read more.

Stapleton used Laura Lyons and Beryl for his own whims; whilst Holmes used Henry by jeopardising his life, and indeed, used Watson to some extent, by failing to inform him of his progress with the case. Moreover, the recurring theme of atavism is a further aspect which goes against the premise of the title. In The Hound of the Baskervilles, the reader is presented with a number of atavistic characters, including Mortimer, who despite being a man of science, is taken in by the theory of the supernatural hound. His is introduced as having produced works such as 'Is Disease a Reversion', 'Some freaks of Atavism', 'Do we Progress'; these works are actually questions that could be asked about Mortimer; reflecting the anxieties brought about by the 'fin de siecle'. Mortimer's job as a scientist actually reduces his credibility because of his disassociation with the rationality that such a job at such a time in human history would indicate. Holmes asks of Mortimer, 'you mean that the thing is supernatural', upon Mortimer's reply of 'I did not positively say so', Holmes replies 'no but you evidently think so'. Mortimer also ignores patient confidentiality, where it is revealed that he disclosed information about the weakness of Sir Charles' heart. It is also made known that he withheld evidence about the existence of footprints, for fear of being seen as a believer in the supernatural. Other throw-backs include Frankland, who uses the law for his own personal gratification: 'he fights for the mere pleasure of fighting and is equally ready to take up either side of the equation' - the way that Frankland ...read more.

tossed in the fire', upon hearing the story of a hellish hound. Holmes continually does away with paranormal ideas, for example, when he remarks, 'but surely, if your supernatural theory be correct, it could work the young man evil in London as easily as in Devonshire'. Throughout the novel, seemingly odd and inexplicable events have a logical basis. A specific instance is when Holmes ascertains the teeth marks of a 'curly haired spaniel' on Mortimer's walking stick. This could imply psychic abilities, were it not for the fact that Holmes' sees the 'dog himself on our very doorstep'. Ultimately, it is Holmes' discovery of phosphorous on the hound's mouth which explains the conflagration emanating from the Hound's jaws. Conversely, in the Suspicions of Mr.Whicher, the detective fails to prove the murderess as guilty, and instead, a confession in necessary to reveal her transgression - because of this, 'God had triumphed where man - and science, and detection - had failed'. The Victorian ideals of rationality are done away with, and the supernatural prevails. To conclude, it is the very human nature of Whicher, and thus, his inability to prove Constance guilty which inevitably makes The Suspicions of Mr. Whicher a narrative lacking in consolation. Conversely, it is Holmes' God-like rationality, and thus his ability to prove Stapleton as guilty which makes for a relatively consoling narration in the The Hound of the Baskervilles. Essentially, we are forced to compare the short-comings of the real world, and of real people, against the greater possibilities of Conan Doyle's fictional world. Word Count (with quotes) = 2628 Word Count (without quotes) = 2051 The Hound of the Baskervilles (Oxford), with editions from Edward Gorman (1)http://www.bakerstreetjournal.com/images/Franklin%20Identity%20-%20Moss.pdf Alfie Collins ...read more.