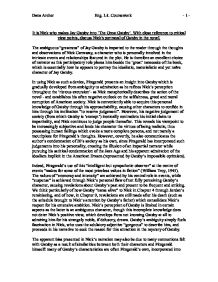 It is Nick who makes Jay Gatsby into The Great Gatsby(TM). With close reference to critical view points, discuss Nick's portrayal of Gatsby in the novel.

It is Nick who makes Jay Gatsby into 'The Great Gatsby'. With close reference to critical view points, discuss Nick's portrayal of Gatsby in the novel. The ambiguous "greatness" of Jay Gatsby is imparted to the reader through the thoughts and observations of Nick Carraway, a character who is personally involved in the intricate events and relationships featured in the plot. He is therefore an excellent choice of narrator as this participatory role places him beside the 'great' namesake of the book, which is essentially how he appears to portray the idealistic, materialistic and yet na�ve character of Jay Gatsby. In using Nick as such a device, Fitzgerald presents an insight into Gatsby which is gradually developed from ambiguity to admiration as he refines Nick's perception throughout the 'riotous excursion'- as Nick metaphorically describes the action of the novel - and establishes his often negative outlook on the selfishness, greed and moral corruption of American society. Nick is conveniently able to acquire this personal knowledge of Gatsby through his approachability, causing other characters to confide in him through his inclination "to reserve judgement". However, his negative judgement of society (from which Gatsby is 'exempt') ironically contradicts his initial claim to impartiality, and Nick continues to judge people thereafter. This reveals his viewpoint to be increasingly subjective and lends his character the virtues of being realistic, thus possessing human failings which evoke a more complete persona, and not merely a mouthpiece for Fitzgerald's thoughts. ...read more.

. Nick's use of such comparisons also suggests the ambiguity in his rendering of Gatsby. Nick only makes us aware of Gatsby's personality in strategically placed narrative elements. These staged revelations, though revealing aspects of Gatsby that hint at criminality (like his activities in Chicago and various other rumours) simultaneously emphasize his admirable qualities such as his prizing of Daisy's love. Indeed, Nick's narration increasingly overlooks Gatsby's flaws, both his and Fitzgerald's views increasingly colouring the tale and casting Gatsby's dream in a positive light. By creating this empathy with Gatsby, Fitzgerald effectively communicates the intense disappointment felt at the intrusion of reality on idealism in the final chapters of the novel, and sympathy for the failure of Gatsby's dream is invoked. Clearly, though Maxwell E Perkins (1924) feels that Gatsby's ambiguity is "mistaken" as it makes his character more nebulous, Fitzgerald actually uses this as a main method of drawing the reader into a prominent theme of illusion, the ultimate illusion being love itself. The mysteriousness of Gatsby is also used to enable Nick's "growth in moral perception" (Troy 1945) which Troy describes as a "necessity" in such a narrator; Nick gradually perceives Gatsby's "moral" side- his "innate purity", and society's lack of this in comparison, subsequently favouring Gatsby and giving some credibility to EK's evaluation of Gatsby being "more real" than the other characters due to the paradoxically pure nature of his dream. In this respect, Chapter 4 is used to further Nick's, and the reader's, positive perception of Gatsby. ...read more.

disillusionment, which Nick empathizes with as he has been a victim of his own illusion regarding the true nature of Daisy and Jordan, and Gatsby's character itself. A "growth in moral perception" (when applied to Nick) is "the tale of the novel" (Troy, 1945) as it is this which ensures Nick's positive portrayal of Gatsby: Nick comes to discover his true history and admired ambition as Gatz, as well as the ultimate tragedy of his still believing, in the face of such adversity as his "dead dream." This moving naivety clearly proves, however, that in Gatsby's case any growth in moral perception does not apply; even though Daisy has clearly returned to Tom's alluring wealth in Chapter 8, Gatsby innocently, and dumbly, states, "I suppose Daisy'll call, too," not perceiving the immorality of the age he lives in. As Kuehl (1959) says, "it is illusion, and not it's materialization" which is the centre of Gatsby's character - he is a dreamer despite his material status, and his "heightened" goals will never be materialized, making them pale in comparison to the concrete aspirations of society and contradicting E.K's evaluation - Gatsby is not precisely "more real" than society, but he is "greater" in many ways, as both Nick and Fitzgerald successfully portray him at the close of the novel: the noble dreams that inspire Nick's admiration within Gatsby are only unattainable due to denounced external factors, and therefore ultimately do not subtract from Gatsby's tragically "great" portrayal. . Word Count- 2,599 ?? ?? ?? ?? Dana Archer Eng. Lit. Coursework - 1 - ...read more.