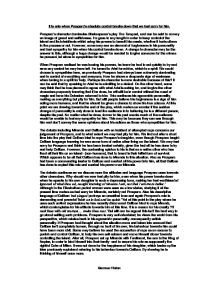 It is only when Prospero's absolute control breaks down that we feel sorry for him. Discuss

It is only when Prospero's absolute control breaks down that we feel sorry for him. Prospero's character dominates Shakespeare's play The Tempest, and can be said to convey an image of greed and selfishness. He goes to any length in order to keep control of the island and its inhabitants whilst using his powers to benefit his needs, whether it hurts others in the process or not. However, some may see an element of forgiveness in his personality and feel sympathy for him when his control breaks down. A change in character may be the answer to this, although a huge change would be needed to forgive someone for the crimes he pursued, let alone to sympathise for him. When Prospero realised he was loosing his powers, he knew he had to act quickly to try and save any control he may have left. He turned to Ariel for advice, which is a spirit. We could choose to sympathise here, as previously Prospero had always been extremely dominating and in control of everything and everyone. Now he shows a desperate sign of weakness when turning to a spirit for help. ...read more.

Which appears to be all that Caliban has done to Miranda in this situation. Also as Prospero had been a commanding leader to Caliban and exerted all his power into him, all that Caliban has done is copied this role and exerted his power over Miranda. The debate continues as we discuss more the attitudes and language Prospero uses towards other characters. Why should we ever feel pity for him, even when his power breaks down when he speaks to his own daughter in such a depressing tone, making her feel worthless 'art ignorant of what thou art, naught knowing of whence I am, nor that I am more better.' Although in the Elizabethan period women were seen as a low status, studying it at the present time makes us feel sorry for Miranda, certainly not Prospero. Also his descriptive language of Caliban 'red plague' portrays an unsettled tone and again Prospero's role is demanding and powerful 'fetch us in fuel and be quick.' Yet at this point in the play where he uses such unkind expressions he has recently discovered Caliban tried to rape Miranda, which contemplates for his attitude towards him at this time. ...read more.

Especially as he still conveyed a controlling personality and acted selfishly to get his own way, even after he had lost his magic. By the last act of the play Prospero has achieved all that he set out to do; he has shown Alonso, Antonio and Sebastian that they had committed a crime against him in banishing him from Milan; they ask for his forgiveness and his Dukedom is restored to him. Prospero reveals to Alonso that his son is alive and the friendship between Alonso and Prospero is sealed by the marriage of Ferdinand and Miranda. Prospero frees Ariel and decides to renounce his magical powers. I believe he was given a second chance to prove to the audience that he could be a fair and honest person, without power. Instead he took the opportunity to continue mistreating others, he made plans and formed ways to regain power he did not deserve. Prospero carried on dominating the characters feelings; as a consequence, he did regain his Dukedom. This was unjustified for him to win the battle against power, but predictable, you can't reverse all the bad you have done if you still carry the traits and behaviours of such evil, and Prospero is a prime example of this. Gemma Hinton ...read more.