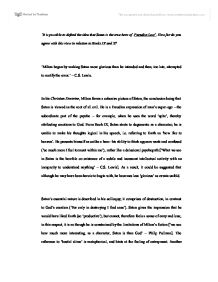 'It is possible to defend the idea that Satan is the true hero of Paradise Lost'. How far do you agree with this view in relation to Books IX and X?

'It is possible to defend the idea that Satan is the true hero of Paradise Lost'. How far do you agree with this view in relation to Books IX and X? 'Milton began by making Satan more glorious than he intended and then, too late, attempted to rectify the error.' - C.S. Lewis. In his Christian Doctrine, Milton forms a cohesive picture of Satan, the conclusion being that Satan is viewed as the root of all evil. He is a Freudian expression of man's super-ego - the subordinate part of the psyche - for example, when he uses the word 'spite', thereby attributing emotions to God. From Book IX, Satan starts to degenerate as a character; he is unable to make his thoughts logical in his speech, i.e. referring to Earth as 'how like to heaven'. He presents himself as unlike a hero: his ability to think appears weak and confused ('so much more I feel torment within me'), rather like a delusional psychopath ['What we see in Satan is the horrible co-existence of a subtle and incessant intellectual activity with an incapacity to understand anything' - C.S. ...read more.

His sycophantic words are those of a courtly lover addressing his 'sovereign mistress'. Eve refers to the fact that the serpent speaks as a 'miracle', which is ironic because miracles normally refer to God. 'The wily snake' maintains the careful flattery and deceptive slyness ('empress', 'resplendent'). He misleads Eve like an ignis fatuus; Milton calls this effect a 'wandering fire'. Similar to his soliloquy, Satan refers to the contrast between high and low and Heaven and h**l, which is a clever argument, because by that logic the Tree of Knowledge is good ('could not reach'). Moreover, he associates the tree with reason rather than passion ('sacred', 'wise', 'mother of science'). In addition, he appeals to senses and appetite - base pleasures - and the temptation works ('sharp desire', 'hunger', 'thirst') as well as to Eve's intelligence and mind ('inward powers'). With the repetition of 'thy', the second person pronoun, convincing emphasis is put on her importance. Satan goes on to question the entire hierarchy ('I question it'), and uses a clever and subtle argument ('What can your knowledge hurt him, or this tree impart against his will if all be his?'), raising the important theological issue of free will. ...read more.

Upon giving his speech, he expects to hear applause, but instead hears a 'dismal universal hiss' because they undergo metamorphosis into 'complicated monsters'; i.e. they undergo physical transformations into serpents. Thus, Satan the supplanter is 'supplanted', and becomes a mere monster in God's epic at the moment that he is about to celebrate his heroic triumph in his own epic. The word 'hiss' uses onomatopoeia, and the reader can literally be thought of as hissing along with the snakes, which in turn gives the impression of scorn and contempt. Shortly afterwards, the grove of trees appears: the serpents feel an overwhelming desire to eat the fruit ('scalding thirst and hunger fierce'), appealing to 'hunger' and 'thirst' much like Satan's approach to tempting Eve before the Fall. There is irony in the use of the word 'sublime' because it is a heavenly emotion. To conclude, whereas Satan seemed somewhat 'glorious' and heroic in his rebellion, he seems to become a dangerous con man coming to believe his own lies. He has 'an incapacity to understand anything'; consequently, the concept of heroism cannot be stretched to include Satan's attitude and thinking as time progresses and he degenerates as a character. More profoundly, Satan and the rebel angels end their role in the epic totally defeated by the power of God. ?? ?? ?? ?? ...read more.