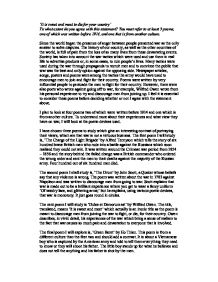 'It is sweet and meet to die for your country' To what extent do you agree with this statement? You must refer to at least 3 poems, one of which was written before 1914, and one that is from another culture.

'It is sweet and meet to die for your country' To what extent do you agree with this statement? You must refer to at least 3 poems, one of which was written before 1914, and one that is from another culture. Since the world began the presence of anger between people presented war as the only answer to solve disputes. The history of our country, as well as the other countries of the world, is full of pain from the loss of so many lives from these devastating events. Society has taken into account the war tactics which were used and use them in real life to advertise products or, in some cases, to ruin people's lives. Many tactics were used during the war through propaganda to recruit men and to convince the public that war was the best and only option against the opposing side. Newspaper articles, songs, posters and poems were among the tactics the army would have used to encourage men to join and fight for their country. Poems were written by very influential people to persuade the men to fight for their country. However, there were also poets who wrote against going off to war, for example, Wilfred Owen wrote from his personal experience to try and discourage men from joining up. I feel it is essential to consider these poems before deciding whether or not I agree with the statement above. ...read more.

Sometimes the wrong orders are given and innocent men are killed by following these orders. From the poem I can tell that Tennyson does not believe in war but has written this poem in disgust of the orders that were sent to the Light Brigade which eventually sent them to their death. I believe Tennyson is trying to put young men off joining the war by telling the story of the Light Brigade through poetic devices and language. There is a big contrast between 'The Drum' and 'The Charge of the Light Brigade' and that is that Tennyson writes at the end of his poem, about honouring the Light Brigade for following the orders sent whereas Scott would not believe that they are honourable or should be honoured. Scott calls young men, 'thoughtless youth' and goes on to explain that they only join for the uniform. He would see these men of the Light Brigade as these 'thoughtless youths' he's written about in his poem. However, both poets are anti-war and use their poems to discourage men from joining to fight for their country. They both use effective poetic devices, such as repetition, to emphasize the suffering of war and that war is an ongoing occurrence which repeats itself. They both also use strong imagery of war to put off the reader and to convey reality of war, that it affects everyone and everything. ...read more.

or your father - dead', and we begin to build up sympathy for the poor boy as we think that he does not know what they are looking for. When his father is shot and we find out that the boy knew all along what they were looking for and knew all the information they needed, I found myself feeling a bit angry that he choose to let his father get killed by the Americans in such a horrifying way. Yet it becomes clear that he thinks it is honourable to die for something he believes in and so I can understand why he choose the way he did. From looking and studying all three poems I have found that I do agree with the phrase 'It is sweet and meet to die for your country' but only if it is something which you strongly believe in. From the first two poems I realised that it is honourable to the men who died in war but in my opinion I could say that I fully agree with such a phrase that has left nations without millions of men who fought for there county. The last poem, 'Green Beret', made me realise that if I truly believed in something then I would be willing to die for it. So to a certain extent I do agree with the phrase but only if you believe that the cause for your country is worth dying for. ?? ?? ?? ?? ...read more.