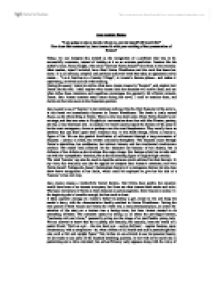 Jane Austen - Emma&quot;I am going to take a heroine whom no one but myself will much like&quot; How does this comment by Jane Austen fit with your reading of her presentation of Emma?

Jane Austen: Emma "I am going to take a heroine whom no one but myself will much like" How does this comment by Jane Austen fit with your reading of her presentation of Emma? Today, we can interpret this remark as the recognition of a problem that was to be successfully overcome, instead of looking at it as an accurate prediction. Readers like the author's niece, f***y Knight, who could "not bear Emma herself" have been in the minority. Most readers, myself included, have liked Emma Woodhouse and the novel that bears her name. It is an intricate, complex and perfectly achieved work that takes an apparently trivial matter - "3 or 4 Families in a Country Village", in Austen's famous phrase - and makes it captivating, involved and rich with meaning. During this essay I intend to outline what Jane Austen means by "heroine", and explain how Emma fits this title. I shall explore why Austen feels her character will not be liked, and yet what defies these intentions and regardless encourages the generally felt affection towards Emma. Jane Austen nurtures many issues during her novel, I need to examine them, and decide on their relevance to the characters position. Jane Austen's use of 'heroine' in her comment outlines who the chief character of the story is, in this book we immediately discover its Emma Woodhouse. The book is justly named Emma, as the whole thing is Emma. There is only one short scene where Emma herself is not on stage; and that one scene is Knightley's conversation about her with Mrs Weston, proving she has a very dominant role. ...read more.

There is a special element of irony in this statement. Even as Austen has Emma relinquish the strategies of matchmaking, Austen condemns her heroine to continue thinking social relationships over and over again, repeating her misreading of s****l relations throughout the book. This is to emphasis the dislike we should be feeling towards Emma. Her complacent manner should evoke a feeling of frustration, instead, in my opinion, we see the funny side, predicting the outcome of Emma's actions, and knowing it's destined to go disastrously wrong. Emma's exclusive attention to marriage plots of her own devising is consistent with her inability to enter into a relation of equality with other women. Her obsession with arranging marriages distorts the relationship with her good friend Harriet Smith, and blinds her from other relational possibilities. The connection with Mrs Weston was never based on equality, she is grateful to her governess/friend for her guidance and education, the relationship is lacking in true parity. The great attraction of Harriet, beyond her blonde beauty and easily swayed temper, was that "everything" could be done for her. Emma's failure to bond with Jane Fairfax (her exact equal in age, abilities and sense) could also to a certain extent be due to her preoccupation with the marriage plot. Friendship between women is necessarily difficult in this period where the aim is to accomplish a husband. Rivalry for a husband of authority and worthiness is visible. Mrs Elton's marriage puts her into competition with all other women in her society and gives her precedence even over Emma Woodhouse; this makes her liable to judgement: "She did not really like her. ...read more.

Her constant strength and vitality are alluring, and bring energy to the book. Emma's an imaginist "on fire with speculation and foresight", giving her a playful, fun appearance, another beneficial quality. Lastly, Emma is bright girl, meaning we don't question her intelligence when things go wrong, just her naivety. She was never deceived about her s****l feelings during the book, and never deceived herself into feeling emotions that weren't there like Harriet seemed to. This emphasised her maturity, and made me, as the reader, value her actions and opinions more then, for example, Harriet's. In the book Emma seems to get everything and everyone wrong, yet her vulnerability is strangely attractive, and is one reason for my approval of her. The much irony directed at her is setting her up to be judged, irony in itself, as she is usually the one doing the judging. What she often thinks of other people is commonly true for her, and therefore classes her on the same level as everyone else. She is the heroine of the book, and proves so with conviction and success. However, to be a disliked heroine is mistaken. Because the book is told from her view constantly, allowing us to understand the character, and sympathise with her wrongdoings instead of judging her for them. Despite foreseeing when something is going to go wrong, we assume it will all turn out okay in the end, and predict there can only be a happy conclusion. Her officiousness and capacity for deluding herself only bulk out the story to make it more exhilarating, while also making Emma a fully rounded character, one which most readers cannot deny, like very much indeed. ...read more.