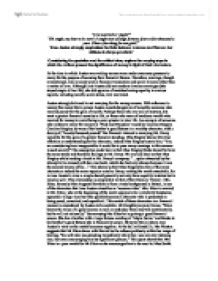 'Jane Austen strongly emphasises the links between romance and finance: her attitude is always practical.'Considering the quotation and the critical view, explore the varying ways in which the writers present the significance of money in light of their

"Is he married or single?" "Oh single, my dear to be sure! A single man of large fortune; four or five thousand a year. What a fine thing for our girls!" 'Jane Austen strongly emphasises the links between romance and finance: her attitude is always practical.' -Considering the quotation and the critical view, explore the varying ways in which the writers present the significance of money in light of their characters. At the time in which Austen was writing women were under enormous pressure to marry for the purpose of securing their financial futures. Therefore, marriage, though romanticised, was in many ways a financial transaction and social alliance rather than a matter of love. Although Jane Austen did not condone loveless marriages (she stayed single all her life), she did approve of matches having equality in various aspects, including wealth, social status, love and mind. Austen strongly believed in not marrying for the wrong reasons. With reference to money this meant that a person Austen would disapprove of would be someone who married purely for the gain of wealth. Perhaps those who are well of anyway, but want a greater financial security in life, or those who were of mediocre wealth who married for money to avoid being a poor spinster in later life. An example of someone who wishes to marry for money in 'Pride and Prejudice' would be Caroline Bingley. Caroline Bingley, by way of her brother's good fortune is a wealthy character, with a dowry of, "twenty thousand pounds" Her financial interest in marrying Mr. ...read more.

However we also hear Jane Austen's opinion on this matter later on when Mrs Gardiner advises Lizzy, saying, "Do not involve yourself, or endeavour to involve him in an affection which for the want of fortune would make so very imprudent." Later in life a woman would rely on her husband's income when her own dowry had run out. A man with little income had few prospects for a woman and so the match would be unwise and thoughtless. Austen presents the point here that it is difficult for a woman to find the line between marrying purely for financial gain and not being improvident and choosing a man without some money to his name. This is contrastable with the marriage of Jane Fairfax and Frank Churchill in 'Emma'. Frank Churchill disregards the fact that Jane has no money, and wishes to marry her nonetheless. This situation is portrayed by Austen through the use of her 'Cinderella plots.' This is a term used when a woman marries above their class, Jane, who is facing the threat of a life of, "penance and mortification" as a governess is saved by both the financial and social status of Frank Churchill. In these plots lines the woman is generally shown to be intellectually astute, so as to match up to her husband. Jane is extremely accomplished in music and manners as well as having a, "an excellent education. Living constantly with right- minded people and well- informed people, her heart and understanding had received every advantage of discipline and culture" this infers that Austen approved of this match, despite the fact that money has been disregarded in the relationship. ...read more.

Austen disapproves of this idea, perhaps not surprisingly so because in Regency England men were supposed to provide for the woman, as apposed to the other way around. This match is comparable to that of Mr and Mrs Elton. Mr Elton first proposes to Emma Woodhouse, a young woman with a thirty thousand pound dowry, when refused he looks for a alternate source of money. When Emma suggests that he might like Harriet, a poor and illegitimate woman with little money to her name. Eventually Mr Elton marries a woman named Augusta Hawkins, a woman with a ten thousand pound dowry. This shows that Mr Elton considered the gain of financial wealth through his choice of wife very important in the match. Jane Austen shows many different situations in which finance should affect your choice of who to marry. In many of these situations she frowns upon those who seek money through marriage, Mr Elton and Miss Bingley are fine examples of these people, and the irony with which their characters are portrayed shows the disdain that Austen feels towards them. However Austen also shows the foolishness of not considering finance in a match, pointing out that in later life a woman will be reliant on the wealth of the man that she has chosen to marry and so she should choose carefully. I believe that although Austen would like to frown on those who look for financial support over love she sees the sensibility and logic in doing so. Austen who remained single for all her life shows an insightful view to the problems of finance and romance in the 18t century. ...read more.