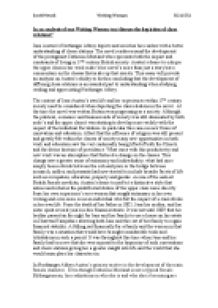 ﻿Scott Menck Writing Woman B211551 In an analysis of one Writing Women text discuss the depiction of class relations? Jane Austen?s Northanger Abbey depicts and enriches her readers with a better understanding of class relations. The novel resides around the development of the protagonist Catherine Morland who represents both the impact and constraints of living in 17th century British society. Austen?s desire to critique the upper class in her work make?s her novel?s more than just a story but a commentary on the classes that make up that society. This essay will provide an analysis on Austen?s ability to do this concluding that the development of differing class relations is an essential part to understanding when studying, reading and appreciating Northanger Abbey. The context of Jane Austen?s own life and her experiences within 17th century society need be considered when depicting the class relations in the novel. At the time the novel was written Britain was progressing as a society. Although the political, economic and business side of society was still dominated by both male?s and the upper class it was starting to develop more widely with the impact of the Industrial Revolution. ...read more.

?No young lady can be justified in falling in love before the gentleman's love is declared, it must be very improper that a young lady should dream of a gentleman before the gentleman is first known to have dreamt of her.?[2] Catherine?s desire and purpose in the novel is typical of a young lady from her class and background, she is searching for both the love and approval of a man. Austen to expose different class relations juxtaposes this comparing her to the character of Mrs. Allen. In the novel Catherine lives with Mrs. Allen in Bath, she is a family friend of the Morland?s. Mrs. Allen has no children nor does her attitude represent the desire to have had any. Instead what we learn from Mrs. Allen is that her love and affection as a woman comes purely from constant gossiping and reputation making her more of a traditional and upper class lady. Her possessive nature over her own clothes and attire speaks for itself in chapter three when she congratulates herself, as soon as they were seated, on having preserved her gown from injury. ?It would have been very shocking to have it torn,? said she, ?would not it? ...read more.