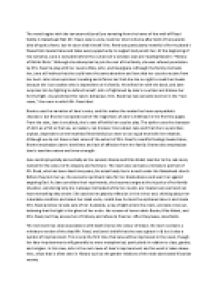 Jane Eyre - Development of Jane's Characters as a Child.

﻿The novel begins with the ten-year-old Jane Eyre narrating from the home of the well-off Reed family in Gateshead Hall. Mr. Reed, Jane?s uncle, took her into his home after both of her parents died of typhus fever, but he soon died himself. Mrs. Reed was particularly resentful of her husband?s favouritism toward Jane and takes every opportunity to neglect and punish her. At the beginning of the narrative, Jane is secluded behind the curtains of a window seat and reading Bewick?s ?History of British Birds.? Although she attempted to join the rest of the family, she was refused permission by Mrs. Reed to play with her cousins Eliza, John, and Georgiana. Although the family mistreats her, Jane still wishes that she could have the same attention and love that her cousins receive from her Aunt. John interrupts Jane?s reading and informs her that she has no right to read their books because she is an orphan who is dependent on his family. He strikes her with the book, and Jane surprises him by fighting to defend herself. John is frightened by Jane?s re-action and blames her for the fight. As punishment for Jane?s behaviour, Mrs. Reed has two servants lock her in the ?red-room,? the room in which Mr. Reed died. Bronte uses the narration of Jane?s voice, and this makes the reader feel more sympathetic character, but Bronte incorporates all of the tragic facts of Jane?s childhood in the first few pages. ...read more.

One day, Jane challenges Mrs. Reed, questioning what her late husband would think of her behaviour. Mrs. Reed punishes Jane for the impertinent question, boxing her ears and ordering Bessie to lecture her, but Jane is interested in the sudden look of fear that she detected in her aunt?s eyes. When the holidays arrive, Jane continues to be excluded from family celebrations and finds solace only in the doll with which she sleeps and in Bessie's kindly goodnight kisses. In mid-January, Mr. Brocklehurst, visits Gateshead and interrogates Jane about her religious beliefs. When Jane informs him that she finds the Psalms to be uninteresting, Mr. Brocklehurst warns her that such beliefs are a sign of wickedness, and she must repent and cleanse her "wicked heart." Mrs. Reed tells Mr. Brocklehurst that she hopes that Jane?s time at Lowood will reform her, particularly her tendency to lie, an accusation that stings Jane. After Mr. Brocklehurst leaves, Jane defends her honesty to her aunt and launches a series of recriminations. Mrs. Reed seems stunned and leaves the room, but Jane's victorious feelings soon give way to remorse. She feels better later when Bessie confides in her that she prefers Jane to the other children. Religion makes its first appearance in the novel in the form of Mr. Brocklehurst. Already, we can see the religious hypocrisies that Bronte exposes; Mr. Brocklehurst believes the deceitful Mrs. Reed?s accusations about Jane and relishes the seemingly heartless reformations that take place at school. ...read more.

Lloyd's visit to her during her illness. Miss Temple believes her and promises to write Mr. Lloyd for confirmation; when he does, Jane's name will be cleared. She treats the girls to tea and cake and discusses intellectual matters with Helen. The bedtime bell breaks the heavenly atmosphere, and Miss Scatcherd reprimands Helen for messiness as soon as the girls enter their bedroom. The next day Helen must wear the word "Slattern" on a paper crown around her forehead; at the end of the day, Jane tears it off for her and burns it. A week later Miss Temple announces to the school that Jane's name has been cleared of all of Mr. Brocklehurst?s charges, and she is officially reaccepted into the community. Jane is relieved to be cleared of blame and works harder in class, particularly in French and drawing. Despite its failings, Lowood is beginning to grow on her. In this chapter, Jane reveals her constant need for love and affirmation from others. No doubt a result of her lonely and loveless time at Gateshead, Jane believes that love is the only thing that can make her happy. Helen counters by describing her belief that spirituality is enough; love in the earthly realm is nothing when compared to the spiritual love of God. While it is clear that Jane will never accept these notions completely, Helen is correct in noting that Jane needs to be less reliant on others. In order to gain independence and strength of character, Jane must learn to be dependent on herself and rely less on the love of those around her. ...read more.