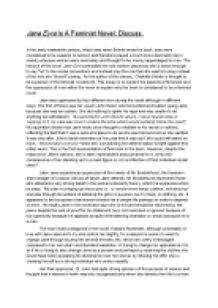 ï»¿Jane Eyre Is A Feminist Novel: Discuss. In the early nineteenth century, which was when Brönte wrote the book, men were considered to be superior to women and therefore played a much more dominant role in society whereas women were secondary and thought to be merely appendages to men. The heroine of the novel Jane Eyre contradicts the role women played as she is brave enough to say “no” to the social conventions and instead play the role that she wants to play instead of the role she “should” portray. As the author of this classic, Charlotte Brönte is thought to be a pioneer of the feminist movement. This essay is to explore the aspects of feminism and the oppression of men within the novel to explain why the book is considered to be a feminist novel. Jane was oppressed by four different men during the novel although in different ways. The first of these was her cousin John Reed, who tormented and bullied young Jane because she was an orphan. ...read more.

Mr Brocklehurst represents those who obtained a very strong belief in the women-inferiority theory, which he expresses when he says, ?My plan in bringing up these girls is?to render them hardy, patient, self-denying? and also through his actions of allowing the girls no luxuries, be it in food, or clothing, etc. It appeared to be his opinion that women should live a simple life perhaps in order to depend on men. He insults Jane in the novel and says she is evil and should be shunned by her peers despite the lack of proof for his statement he is not overruled or ignored because of his superiority because he appears as quite a threatening character or simply because he is a man. The main male protagonist in the novel, Edward Rochester, although undeniably in love with Jane seemed to try and control her slightly, for example he seems to want to change Jane through buying her several dresses, etc. which are overly extravagant compared to her own plain and standard wardrobe. ...read more.

Women had no control in their lives or even over their bodies; they had no idea of their value they were just a possession belonging to a man. Whilst some women were quite content just to follow this regime, some like Jane were unhappy with the obvious dominance of men and henceforth the obvious lack of equality between the two genders and so I believe that the characteristics and beliefs of Jane are what most strongly equate to this being a feminist novel. To conclude I believe that there are several reasons and points within the book that successfully suggests that Jane Eyre is a feminist novel, but I think most prominent and perhaps obvious is the overall character of Jane and how she breaks out of the mould of the typical woman with her independent and intelligent actions. When reading the novel, women of that time would perhaps look to Jane as a heroine and feel inspired that there is may be more to a woman than merely a wife and a mother, but a strong, independent individual. ...read more.