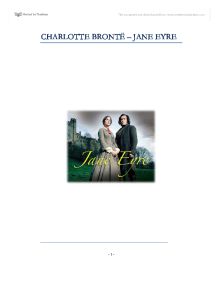 Jane Eyre. We would like to show you Jane Eyres character and its developement during the time with the help of each section. Then we have dealt with gothic and romantic features. It may seem that the novel contains a romantic love story, but it is ac

CHARLOTTE BRONT� - JANE EYRE INTRODUCTION We have chosen the book Jane Eyre written by Charlotte Bront� because the novel has many controversial and interesting topics which we can deal with. It has always been a hot theme of discussions. We would like to show the reader that the role of women in the Victorian era wasn�t as easy as you may think. But there were women (like Jane Eyre) who tried to live their own lives, trust mainly themselves and be independent. We would like to show you Jane Eyre�s character and its developement during the time with the help of each section. Then we have dealt with gothic and romantic features. It may seem that the novel contains a romantic love story, but it is accompanied by many gothic elements. CONTENT I. JANE EYRE IN THE VICTORIAN ERA a. The Victorian Age - Social Background b. Women in The Victorian Era c. Feminist features in the book II. CHARACTERIZATION AND DEVELOPEMENT OF JANE EYRE�S CHARACTER a. The Gateshead section b. The Lowood section c. The Thornfield section d. The Moor house section e. The Ferndean section III. GOTHIC AND ROMANTIC ELEMENTS IN THE BOOK a. Gothic elements b. Romantic elements JANE EYRE IN THE VICTORIAN ERA VICTORIAN ERA - SOCIAL BACKGROUND The Victorian Era is dated from 1837 to 1901, the years that Queen Victoria was the British monarch. The era was preceded by the Regency era and came before the Edwardian period. This time was one of incredible change in Great Britain. It was a long period of prosperity for British people, vast cultural, social, and technological changes occurred. ...read more.

Reed and Jane. Poor little Jane always hated and bullied by her step family. An orphan since an early childhood, Jane feels lonely. At the beginning she is also very conflicting child and has to learn how to deal with this behavior. She often speaks in a strange way for a little girl and she seems to be mature for her age. Cruelly treated by her aunt as well as by her cousins she feels alienated. Afraid that she will never find a true sense of home and love, Jane feels the need to belong somewhere. She desperately seeks for autonomy and freedom in the first part of the book. At the end of this part Jane is send to school for orphans in Lowood where starts second important period of her life. THE LOWOOD SECTION The Lowood section is considered partly realistic. The image of life in many charitable or religious schools in the first part of the 19th century is perfectly portrayed here. Cruel treating with the pupils, lack of food, strict regime and other aspects leads to several problems. The most catastrophic trouble starts with health problems of many of the girls living in Lowood institute along with Jane. The most important Jane's relationship comes with her first and best friend Helen Burn's. For the first time Jane feels to be loved by someone. Immortal friendship between Jane and Helen lasts even after Helen's death of typhus. The section is important also for its introduction of the theme of Christian love and forgiveness. Jane learns a lot from Helen Burn's spiritual strength and humility. ...read more.

Nothing ever rode the Gytrash: it was always alone; and goblins, to my notions, though they might tenant the dumb carcasses of beasts, could scarce covet shelter in the commonplace human form" (charter 12) Supernatural Aspects Jane Eyre is full of unexplained or partially explained moments: the light that she sees in the Red Room. She thinks is the spirit of her dead uncle but it might be somebody walking out side with a lantern. The lightening splitting the oak tree just before the wedding may be considered as a symbol for the separation of Jane and Mr. Rochester. The novel has been criticised for its use of coincidence: Jane goes wandering and just by coincidence she ends up at the house of her cousins. The turning point of the novel is just an unexplained event. Jane returns to Thornfield because she hears Rochester calling for her help, and travels back to find the house burned down and Rochester blind and hurt. There are no ghosts in Jane Eyre, but every part of Jane's life is preceded by her imagining a supernatural visitation from another world. And Mr. Rochester's telepathic communication to Jane towards the end of the novel is in fact a supernatural phenomenon used for the purpose of fiction. ROMANTIC ELEMENTS All of the aspects of a romantic genre novel are noticeably and clearly evident to the reader in Jane Eyre. A romantic novel is considered to contain high moral tone, an optimistic outlook, focus on action rather than character development, setting and nature which reflect the feelings of the characters, heroes struggling to attain ideals, and reading providing an escape from the daily routine of the protagonist. ...read more.