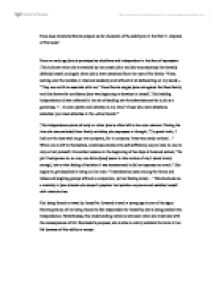 How does Charlotte Bronte prepare us for character of the adult Jane in the first 11 chapters of the book? From an early age Jane is portrayed as rebellious and independent in the face of repression. This is shown when she is attacked by her cousin John and she unconsciously but brutally defends herself, and again when she is later ostracized from the rest of the family: "Here, leaning over the banister, I cried out suddenly and without at all deliberating on my words - "They are not fit to associate with me." Here Bronte singles Jane out against the Reed family and this shows the confidence Jane was beginning to develop in herself. This budding independence is later reflected in her act of sending out the advertisement for a job as a governess, "...it came quietly and naturally to my mind 'Those who want situations advertise: you must advertise in the -shire Herald.'" This independence starts of early on when Jane is often left to her own element. During the time she was excluded from family activities, she expresses in thought, "To speak truth, I had not the least wish to go into company, for in company I was very rarely noticed..." When one is left to themselves, loneliness evolves into self-sufficiency as you have no one to rely on but yourself. At another instance in the beginning of her days at Lowood school, "As yet I had spoken to no one, nor did anybody ...read more.

Jane made no use of tact or any of the various social conventions for protecting the feelings of someone with whom she had a disagreement. Her frank declaration to Mr. Brocklehurst proves this when she says, "I deliberated a moment: my answer, when it came, was objectionable: 'I must keep in good health and not die.'" The fact that Bronte makes it sound like Jane knows that what she's saying is defiant and bold, gives us the feeling that Jane has the strength and guts to speak out, even when she knows she might be reprimanded for it. However this is not in vain, Jane does not act up to gain attention or to create chaos, she is stuck in a position where even her good behaviour goes unnoticed and she is treated the same way whether she behaves acceptably or not. "However carefully I obeyed, however strenuously I strove to please her, my efforts were still repulsed". Bronte makes us acutely aware that Jane behaves this way to stand up for herself and we the readers fall on her side in sympathy and support. Furthermore, as we examine Jane's character more deeply, we see that she develops a sense of pride and self-respect. She cares much of her reputation and is highly sensitive to what the people around her think of her. When we see Mrs. ...read more.

Temple asks Jane for the truthful account of her relationship with the Reed family and Jane thinks to herself, "I resolved in the depths of my heart, that I would be most moderate - most correct; and having reflected a few minutes in order to arrange coherently what I had to say, I told her all the story of my sad childhood." I think this holds some irony that Jane was so careful not to falsely accuse her aunt of anything when narrating the story of her life with the Reeds while her aunt had no care to refrain from such things in Jane's case. Yet it is this strong conscience of Jane's that we see later on when she rejects for a time Mr. Rochester's proposal of marriage when she finds out about his already present wife Bertha. Jane's attitude about justice remains strongly with her through adulthood. As a child, she explains this doctrine to Helen when she says, "If people were always kind and obedient to those who are cruel and unjust, the wicked people would have it all their own way; they would never feel afraid, and so they would never alter, but would grow worse and worse. When we are struck without reason we should strike back again very hard...as to teach the person who struck us never to do it again." This feeling progresses into the adult Jane when she refuses to stand any nonsense from Mr. Rochester. Jane Eyre is a character whose strength and individuality are remarkable for her times. ...read more.