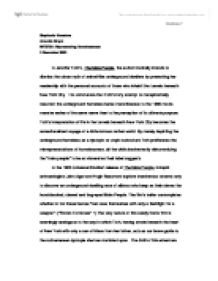 Stephanie Vanstone Amanda Grzyb MIT272A: Representing Homelessness 5 December 2003 In Jennifer Toth's, The Mole People, the author ironically intends to dismiss the urban myth of animal-like underground dwellers by presenting her readership with the personal accounts of those who inhabit the tunnels beneath New York City. It is unfortunate that Toth's lofty attempt to metaphorically resurrect the underground homeless bares more likeness to the 1956 movie monster series of the same name than to the perception of its ultimate purpose. Toth's interpretation of life in the tunnels beneath New York City becomes the sensationalized voyage of a dichotomous nether world. By merely depicting the underground homeless as a dystopic or utopic subculture Toth proliferates the misrepresentations of homelessness, all the while inadvertently dehumanizing the "mole people" to be as visceral as their label suggests. In the 1956 Universal Studios' release of The Mole People, intrepid archaeologists John Agar and Hugh Beaumont explore treacherous caverns only to discover an underground dwelling race of albinos who keep as their slaves the hunchbacked, clawed and bug-eyed Mole People. The film's trailer contemplates whether or not these heroes "can save themselves with only a flashlight for a weapon". ("Rotten Tomatoes" 1) The very nature of this seedy horror film is seemingly analogous to the way in which Toth, having strode beneath the heart of New York with only a can of Mace from her father, acts as our brave guide to the subterranean dystopia she has stumbled upon. ...read more.

(161) Perhaps, her audience can momentarily refrain from peeing its pants; that is until she incessantly reminds them of a third rail that pulses with electricity, or of the hidden criminals, drug addicts, enormous rats and rushing trains that occupy the tunnels. However, just when it is reasonable to believe that the "mole people" are villainous creatures, doomed to the lifelessness of their underground dystopia, Toth strategically twists the plot and allows her audience to empathize with them. Once more, Toth's work is reminiscent of the Universal Studios' 1956 monster series of the same name; the only difference being that their "mole people" partook in terrible dance scenes when they grew tired of enforcing their reign of terror upon society. For obvious reasons, portraying the tunnels as an alternative utopia to the "topside world" becomes just as harmful to Toth's "cause" as it is to depict the tunnels as a dystopia. This book craves for a common ground. Toth's glorification of what she calls "the homeless version of the sweet life" is equally disturbing in the sense that it has the ability to tempt its audience into wanting to join the ranks of the underground homeless. Needless to say, the enchantment and hyper-reality of Disneyland cannot lie within a subway tunnel. One is lead to believe that Toth would have her "mole people" singing and dancing in a well-orchestrated chorus line if she could. ...read more.

She goes on to depict Joey as being seen as a "useless parasite of an old man". (113) Toth can "feel the eyes" of the "mole people" in tunnel and often distinguishes them by way of their faint growls and reverse hisses. Toth admits that the Dark Angel personifies her visceral fears of the underground and the creatures that exist there. (169) She encounters gangs of youth who roam the tunnels for helpless prey, laughs at alien-like figures that resemble E.T. and compares the entryway of J.C.'s community to the entrance of a "good-sized dog house". (193) Throughout The Mole People, Toth continually stresses the importance of possessing "a primeval instinct for survival" when beneath the tunnels in New York City. (239) Overall, it becomes clear that if Toth were to have taken a more pragmatic approach in her depiction of "the mole people" her book could have been viewed as a revolutionary work in its field. As it is, The Mole People, plays out more like a Nancy Drew novelette than a text whose aim is to dismiss the urban myth of animal-like underground dwellers. Toth's voyeuristic portrayal of a strictly dichotomous subculture makes it impossible for her audience to objectively examine the realities of life in the tunnels beneath New York City. On this thrill ride, Toth inadvertently propagates the very images of the "mole people" she is seeking to dismiss, effectively deceiving her readership to believe that what they see is the truth. It is for these reasons that Toth's, The Mole People, is a grave misrepresentation of homelessness. ...read more.