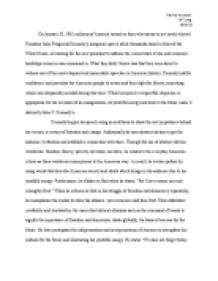 ﻿Fatima Hussaini AP Lang 10/9/12 On January 20, 1961 millions of America turned on their televisions to see newly elected President John Fitzgerald Kennedy?s inaugural speech while thousands stood in front of the White House, all waiting for the new president to address the current state if war and economic hardships America was consumed in. What they didn?t know was that they were about to witness one of the most eloquent and memorable speeches in American history. Kennedy instills confidence and provokes the American people to action and their fight for liberty, something which was desperately needed during that time. While his speech?s respectful eloquence is appropriate for the occasion of an inauguration, its youthful energy and look to the future make it distinctly John F. Kennedy?s. Kennedy begins his speech using an antithesis to show the real importance behind his victory, a victory of freedom and change. Additionally he uses abstract diction to get the audience?s attention and establish a connection with them. Through the use of abstract diction, words like: freedom, liberty, poverty, devotion, sacrifice, he relates to the everyday American citizen as these words are synonymous to the American way. In result, he evokes pathos by using words that describe American society and ideals which brings in the audience due to his youthful energy. Furthermore, he alludes to God when he states, ?For I have sworn you and Almighty God.? While he references God in his struggle of freedom and democracy repeatedly, he manipulates the syntax to show his alliance: you (America) ...read more.

Not only this but the recurring word ?pledge? is placed wherever Kennedy is about to make a promise. The word has a positive connotation because it is stronger than a promise and it gives a sense that it is coming from the heart. Promise nowadays is an everyday term, but the use of pledge shows Kennedy?s youthful energy through his dedication and focus into achieving his goals. Throughout he establishes a confident and sincere tone, that illustrates his youthful energy and commitment to help others who are victims of communism while uniting with other nations to end the ?mass misery? and ?chains of poverty: while indirectly stating his future goal, world peace. Kennedy?s strongest use of parallelism was in paragraphs 14-17 where he used an anaphora ?let both sides.? He calls for unity in the hortative sentence, ?Let both sides explore what problems unite us? Let both sides, for the first time; formulate serious and precise proposals? Let both sides seek to invoke the wonders of science instead of is terror? Let both sides unite to?? The combination of parallelism and an anaphora places the importance of unity between both nations as well as a call of action to end this ongoing war that?s only proving to be destructive. He uses logos by stating the logic behind why wars should be avoided. ...read more.

This causes readers to feel a connection as Americans to Kennedy. He shares his energy by saying that by everyone contributing, the world can become a better place. It also contributes to one of his goals, which is to have a nation where the people contribute more in a result achieving a nation that is the best it could be. Kennedy?s inaugural speech is one to be remembered throughout history. Kennedy's artful and abstract diction, effective use of rhetorical devices, and his confident tone throughout the speech reassure the American public of the abilities of their newly elected president. His use of repetition proves that he is serious about achieving peace and unity. By juxtaposing several ideas, he convinces America to believe in his position that will lead America into prosperity. He uses zeugmas and antimetaboles to inspire citizens to do something for their nation. Kennedy's goal with his inaugural address was to voice his intentions as president, and use his youthful energy to convince people of his goals and outlook for the future. Without the use of effective rhetoric, Kennedy would never be able to get the American people on his side and trust him and his look for the future. His use of rhetorical devices is effective and relate to what America needed in a leader during the 1960?s. The late, great Kennedy gained respect from many people with this speech, and till this day and forever on this speech will be always remembered and be set as a standard for future presidents to come. ...read more.