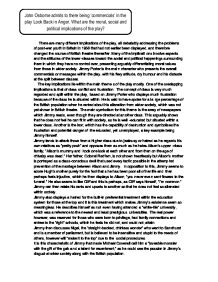 John Osborne admits to there being commercials in the play Look Back in Anger. What are the moral, social and political implications of the play?

There are many different implications of the play, all debatably addressing the problems of post-war youth in Britain in 1956 that had not earlier been displayed, and therefore changed the course of British theatre thereafter. Many of the implications involve aspects and the attitudes of the lower-classes toward the social and political happenings surrounding them in which they have no control over, presenting arguably differentiating moral values from those in wider society. Jimmy Porter is the main character who presents the overall commercials or messages within the play, with his fiery attitude, dry humour and his distaste at the split between classes. The key implications lie within the main themes of the play mostly. One of the overlapping implications is that of class conflict and frustration. The concept of class is very much regarded and split within the play, based on Jimmy Porter who displays much frustration because of the class he is situated within. He is said to have spoke for a large percentage of the British population when he ranted about his alienation from wider society, which was not yet shown in British theatre. ...read more.

The main reason for this is rooted in the story of watching his idealist father dying for a year because of wounds received fighting in the Spanish Civil War. He then sums up his anger by stating that he "learnt at an early age what it was like to be angry - angry and helpless." And that he can "never forget it". The moral aspects within the play involve the concept of love, sex, marriage and friendship. One of the moral complications is Helena and Jimmy's relationship whilst Alison is pregnant, and married by definition, to Jimmy, which borderlines on friendship and adultery. Helena accepts her faults because she feels it is not politically or morally correct toward Alison and is not comfortable within the social surroundings as she is accustomed to those of a higher class, which is displayed when she says "by everything I have ever believed in or wanted, what I am doing is wrong and evil." Jimmy's morality ignorance is shown when he directly replaces Alison with Helena at the ironing board in Jimmy's shirt but knows that what he is doing goes against her beliefs when he says that she is "living in sin". ...read more.

Jimmy is born out of his time, and this is perceived when Helena states there is "no place for him anymore" bringing about problems of social identity he then faces, due to the struggle to fit in somewhere, as his occupation differs from his education standards; operating a sweet stall. He sees suffering in life as the only way to "earn" one's true identity, such as when Alison's loss makes her come back to Jimmy. Helena learns that she can only be happy is she live according to her principles of right and wrong, so leaves Jimmy. Colonel Redfern is also caught out of his time. The country he left as a young officer no longer exists, and Jimmy calls him "one of those sturdy plants left over from the Edwardian Wilderness that can't understand why the sun isn't shining anymore" to which the Colonel agrees to. In conclusion, it is evident that each of the moral, social and political implications emphasise the commercials within the play and the beliefs of the times through different interpretations of the character of Jimmy Porter. It changed British theatre greatly due to the arising of problems never before highlighted within the lower class, all surrounding each of those aspects. ?? ?? ?? ?? Kate Iliff ...read more.