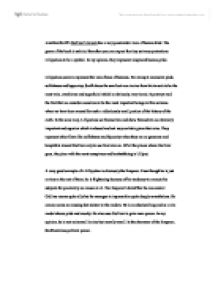 Jonathan Swift's Gulliver's travels has a very pessimistic view of human kind. The genre of the book is satirical therefore you can expect the tiny yet very pretentious Lilliputians to be a symbol. In my opinion, they represent misplaced human pride. Lilliputians seem to represent the main flaws of humans. For example excessive pride, selfishness and hypocrisy. Swift chose the smallest race in size from his travels to be the most vain, overblown and superficial which is obviously, very ironic. It portrays well the fact that we consider ourselves to be the most important beings in this universe when we have been around for such a ridiculously small portion of the history of the earth. ...read more.

A very good example of a Lilliputian is obviously the Emperor. Even though he is just as tiny as the rest of them, he is frightening because of his tendency to execute his subjects for practically no reason at all. The Emperor's belief that he can control Gulliver seems quite silly but he manages to impress him quite deeply nevertheless. He comes across as amusing but sinister to the readers. He is an absolute king and as a role model shows pride and cruelty. He also uses Gulliver to gain more power. ...read more.

It also represents in a more broad sense the sometimes really unimportant reasons people go into war. The passage where the Lilliputians use Gulliver by sending him to go steal Blefuscu's navy actually refers to a historical event. In the book, Gulliver goes over to Blefuscu, ties all the boats from their navy together and simply drags them back over to Lilliput. By this, Swift is making reference to an incident around 1665 where the story says that during the war between the Dutch and the British, the Dutch sailed into the British port, attached the totality of the British navy to their own and simply sailed away with it. In my opinion, the technique Swift uses to get interest out of his readers is black humour. ...read more.