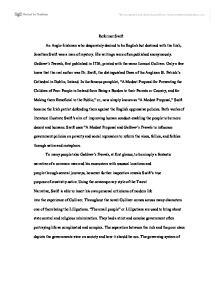 Jonathan Swift the master of satire deeply cared for society and people. His desire to improve society and humanity inspired him to write Gullivers Travels and A Modest Proposal.

Reformer Swift An Anglo-Irishman who desperately desired to be English but destined with the Irish, Jonathan Swift was a man of mystery. His writings were often published anonymously. Gulliver's Travels, first published in 1726, printed with the name Lemuel Gulliver. Only a few knew that the real author was Dr. Swift, the distinguished Dean of the Anglican St. Patrick's Cathedral in Dublin, Ireland. In the famous pamphlet, "A Modest Proposal for Preventing the Children of Poor People in Ireland from Being a Burden to their Parents or Country, and for Making them Beneficial to the Public," or, now simply known as "A Modest Proposal," Swift became the Irish patriot defending them against the English oppressive policies. Both works of literature illustrate Swift's aim of improving human conduct-enabling the people to be more decent and humane. Swift uses "A Modest Proposal and Gulliver's Travels to influence government policies on poverty and social repression to reform the vices, follies, and foibles through satire and metaphors. ...read more.

(40) Swift satirizes the Lilliputian law to demonstrate the ridiculous laws Parliament creates; laws that were often unbeneficial to society instead of constructing regulations that improve society. In "A Modest Proposal" the assurance of "a young healthy child well nursed is at a year old a most delicious, nourishing, and wholesome food, whether stewed, roasted, baked, or boiled ..." (507) depicts children as delicious items of food. The use of satire enables audiences to recognize Swift's sarcasm and clearly understand the attack Swift is making on the English government. Ireland was suffering from great poverty and Swift blames the British who evidently are held responsible due to the fact that Ireland, at the time, was a colony, many of the people were servants to the British landlords who demanded large amounts of rent or payment. The sarcasm pokes fun at the heartless English governments attitude and action toward the greedy British landlords and the starving children. The description of the children as pieces of meat was an adamant signal to catch the attention of the English Parliament. ...read more.

(505) The metaphor depicts children as an item for sale similar to meat being sold at a meat market with "helpful" tips for the sellers. Through the metaphor Swift plays on the emotional appeal of the audience, arousing the tender and passionate feelings. The proposal of offering children as sources of food is introduced to enhance the real impact of poverty. Swift takes the poverty in Ireland to an extreme and recommends the distribution of the younger ones to bring to light the true devastation and extent of poverty for which the lack of ruling and help from the English government is blamed for. Jonathan Swift the "master of satire" deeply cared for society and people. His desire to improve society and humanity inspired him to write Gulliver's Travels and "A Modest Proposal." Both are brilliant works of literature used to reform the government's policy on issues like poverty and social oppression through the techniques of satire and metaphor. Swifts ultimate goal in writing both literary works was the eventual happiness or equilibrium of society. ...read more.