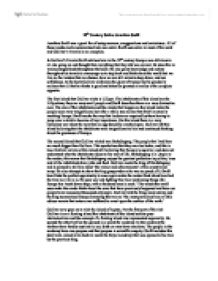 Jonathan Swift was a great fan of using sarcasm, exaggerations and caricatures. All of these words can be summarised into one satire. Swift uses satire in most of his work and Gulliver's Travels is no exception.

18th Century Satire: Jonathan Swift Jonathan Swift was a great fan of using sarcasm, exaggerations and caricatures. All of these words can be summarised into one satire. Swift uses satire in most of his work and Gulliver's Travels is no exception. In Gulliver's Travels Swift satirises how in the 18th century Europe was oblivious to all else going on and thought that everything that they did was correct. He does this in various stages/lands throughout the book. He also gains knowledge and culture throughout his travels to encourage us to step back and think about the world that we live in, the leaders that are chosen, how we are still animals deep down, and our selfishness. In the book Gulliver celebrates the glory of Europe but he gradually realises that all that he thinks is good and takes for granted as reality is the complete opposite. The first island that Gulliver visits is Lilliput. The inhabitants of this island are the Lilliputians; they are very small people and Swift describes them as a very diminutive race. ...read more.

He also attempts to show the king gunpowder as he was so proud of it. Swift here finds the perfect opportunity to once again make the reader think about how bad the time we live in is. He uses war and fighting this time mentioning things like Europe has 'sunk down ships, with a thousand men in each.' The words that swift uses make the reader think about the wars that have previously happened and how our people have massacred thousands of people. Gulliver told the King many stories and the king summarised Europe by saying that we are 'the most pernicious race of little odious vermin that nature ever suffered to crawl upon the surface of the earth.' Gulliver now goes on to visit the island of Laputa. For the first part of his visit Gulliver is on a floating island the inhabitants of this island satirise pure intellectualism and the concept of a floating island also represented superiority. He spends the other half on the ground in a scientific academy. In the academy the workers have hardly any time to eat, drink or even have emotions. ...read more.

Time goes on in the land of the Houyhnhnms and Swift gradually begins to realise that Europe is not so perfect and that all of these things he has been boasting about in his adventures now disgust him. The main affect the Swift wanted the book to have on the reader was for him/her to step back, analyse the world that we live in and hopefully attempt to make it closer to the Utopia's he wrote about in the book. I think that Swift's view on human nature is very pessimistic and that he was a person that had a very negative view about life and the way the world was. I think the things that are similar between our time and Swifts time is that wars and disputes still go on, there is still inequality, there are still people who do bad things and the law system has not changed. The things that I think have changed in time are the politics system, the way that we are aware of the less fortunate and some people choose to help. I think that whatever time we are in and whatever place someone somewhere will have a fault with it and attempt to make it better. ...read more.