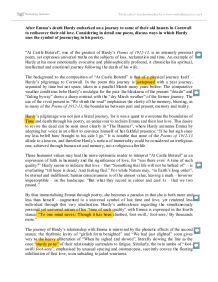 After Emma's death Hardy embarked on a journey to some of their old haunts in Cornwall to rediscover their old love. Considering in detail one poem, discuss ways in which Hardy uses the symbol of journeying in his poetry. "At Castle Boterel", one of the greatest of Hardy's Poems of 1912-13, is an intensely personal poem, yet expresses universal truths on the subjects of loss, reclamation and time. An example of Hardy at his most emotionally evocative and philosophically profound, it chronicles his spiritual, intellectual and emotional journey following the death of his wife. The background to the composition of "At Castle Boterel" is that of a physical journey itself - Hardy's pilgrimage to Cornwall. In the poem this journey is juxtaposed with a past journey, separated by time but not space, taken in a parallel March many years before. The comparative weather conditions belie Hardy's nostalgia for the past: the bleakness of the present "drizzle" and "fading byway" draws a sharp contrast with the "dry March weather" of the former journey. The use of the vivid present in "We climb the road" emphasises the clarity of the memory, blurring, as in many of the Poems of 1912-13, the boundaries between past and present, memory and reality. ...read more.

However as Hardy begins to muse upon the nature of Time itself, this grander theme is accompanied by philosophical language, using more abstract phrases such as "Time's unflinching rigour" and "mindless rote". Hardy rages against the insuperable adversaries of Time and Nature, the great eternal obstacles to his journey. Just as in "Rain on a Grave", Nature is described as holding humankind in "ruthless disdain," here the "Primaeval rocks" dispassionately watch the procession of humanity. "First and last", they are both ancient and everlasting, unmoved by the insignificance of the "transitory" journey of human life. The cruel indifference of Time and Nature is further symbolised in Castle Boterel. Once a majestic monument to human endeavour and achievement, little remains but some barely discernible ruins. Worn away by Time and Nature, the castle represents the fading of human history from both memory and the landscape as enduring Nature reigns everlasting. The brutal rhythmic effect of the iambic tetrameter in the line "In mindless rote, has ruled from sight" expresses the ruthlessness of Time's "unflinching rigour". The effect is continued in "Remains on the slope, as when that night", which echoes the marching rhythm through the masculine rhymes of "rote" and "slope", as well as "sight" and "night". ...read more.

absurdly tries to assert that Emma's departure was, as before, a deliberate lack of manners: "Your meaning seems to me/ Just as it used to be:/ 'Good-bye is not worth while!'" "The Haunter" too exposes delusion in Hardy's attempt to reassure himself that Emma is still by his side: "Hover and hover a few feet from him/ Just as I used to do". By contrast, the altogether calmer tone of "At Castle Boterel", (the penultimate poem in the sequence) is more indicative of "acceptance" - the final stage, which allows the griever to move on. For as Hardy nears the end of his journey through grief, life and Time, he approaches a "junction of lane and highway" - a crossroads suggestive of a transition, and an allusion to the divide between town and country that so preoccupied him. A man of many conflicts and paradoxes, Hardy was indeed a "time-torn man", caught in the rift between Romanticism and Modernism; two movements of two centuries. "At Castle Boterel" is itself an elegiac journey from grief to acceptance, and, as Hardy prepares to move on to the next phase of life, a farewell not just to Emma, but to Romanticism itself. ?? ?? ?? ?? ...read more.

An excellent essay, which demonstrates understanding of how poetic technique and subject matter are intricately linked and used to craft and create meaning. The writer understands and can explain the effects of a range of poetic devices - not only metaphor, but also enjambment, masculine and feminine rhyme, and to some extent rhythmic effects, though these could be explored in more detail.
There is also a real sense in this essay that the writer has something to say and has responded personally and thoughtfully to the poem. An excellent vocabulary helps to give the essay fluency of expression.
*****