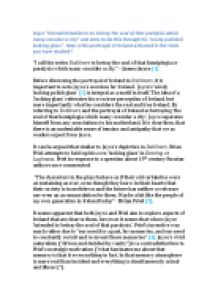 Joyce Intended Dubliners to betray the soul of that paralysis which many consider a city and aims to do this through his nicely polished looking glass. How is this portrayal of Ireland achieved in the texts you have studied?

﻿Joyce ?Intended Dubliners to betray the soul of that paralysis which many consider a city? and aims to do this through his ?nicely polished looking glass?. How is this portrayal of Ireland achieved in the texts you have studied? ?I call the series Dubliners to betray the soul of that hemiplegia or paralysis which many consider a city.? ? James Joyce [1]. Before discussing the portrayal of Ireland in Dubliners, it is important to note Joyce?s aversion for Ireland. Joyce?s ?nicely looking polish glass? [2] is integral as a motif in itself. The idea of a ?looking glass? reiterates his own true perception of Ireland, but more importantly what he considers the real and true Ireland. By referring to Dubliners and the portrayal of Ireland as betraying ?the soul of that hemiplegia which many consider a city?, Joyce separates himself from any associations to his motherland. It is clear then, that there is an undeniable sense of tension and antipathy that we as readers expect from Joyce. It can be argued that similar to Joyce?s depiction in Dubliners, Brian Friel attempts to hold up his own ?looking glass? in Dancing at Lughnasa. Friel in response to a question about 19th century Russian authors once commented: ?The characters in the plays behave as if their old certainties were as sustaining as ever, even though they know in their hearts that their society is in meltdown and the future has neither a welcome nor even an accommodation for them. ...read more.

Sweep the chimney. Cut the grass?. In the same way that the Mundy sisters see dance as a form of catharsis, Eveline tries to see marriage as a form of escapism, but her credence is invalid. As S. Frank (2001) states, ?the cycle of dependency, responsibility and the denial of the spirit is shown time and again in dominating marriage? [10]. Kate?s anagnorisis to Maggie that ?it?s all about to collapse? is identical to Eveline?s false epiphany of eloping with Frank. ?I don?t think I could go through that again?, along with Kate?s general rhetoric during this exchange with Maggie suggests that like Eveline, Kate?s dependence on habit and routine is all too much to bear. So much so, that she succumbs to inadvertently distrust her faith; ?I must put my trust in God, Maggie, musn?t I? He?ll look after her, won?t he? You believe that Maggie, don?t you?? ? the succession of rhetorical questions create a triple emphasis, and in effect makes for a role reversal between Kate and Maggie during this exchange. Kate, arguably the epitome of the 1930?s Catholic spinster (matriarchal, controlling, and of a paternal role) is seeking reassurance from Maggie ? a character that is essentially just comic relief for us as readers. During the 1930?s, the Catholic Church was almost unquestioned by the clerical Irish community as faith was seen to be that strong. By Kate (A personification of the church) even seeming to question her faith, Friel is trying to elaborate this idea of change in Ireland, and the anxiety surrounding it. ...read more.

It is the same with Gerry Evans. Eveline?s narrow hope of escape with Frank is also short-lived. In both of these texts, it seems apparent that the backdrop of Ireland is nothing but a manifestation of ?a paralysis which marks its termination? K.Declan (1995) [14]. Where both Dubliners and Lughnasa attempt to convey in some capacity, an ?Ireland frozen in servitude? K.Declan (1995) [15], the argument remains that Friel?s narrative is more altruistic then Joyce?s: ?In that memory, too, the air is nostalgic with the music of the thirties. It drifts in from somewhere far away ? a mirage of sound ? a dream music that is both itself and its own echo; a sound so alluring and so mesmeric that the afternoon that the afternoon is bewitched, maybe haunted by it? Dancing as if language no longer existed because words were no longer necessary?. Irrespective of what came before this, there is more optimism in this conclusion of Friel?s then that of Joyce, which could be indicative of hope for Ireland, as being our ?only method of replying to... inevitabilities? ? Brian Friel [16]. James Joyce on the other hand, wished to ?betray the soul of that paralysis which many consider a city?, and indeed does so through his ?scrupulous meanness? K. Declan (1995) [17]. The snow almost as a canopy over the environment is a metaphor for paralysis taking over. It has paralysed everything in its way; people, places, religion, pride, identity and culture ? in essence, the whole of Ireland. By the end of Dubliners, Ireland well and truly becomes Joyce?s ?centre of paralysis? [18]. ...read more.