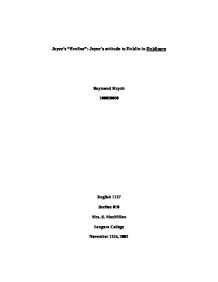 Joyce's attitude to Dublin in Dubliners

Joyce's "Eveline": Joyce's attitude to Dublin in Dubliners Raymond Huynh 100050050 English 1127 Section 010 Mrs. S. MacMillan Langara College November 12th, 2002 To many people, Dublin is regarded as an ancient city. The Vikings founded the city in 842 and named it "Dublin", which means "dark pool" in Scandinavian (Moss and Wilson 107). Ireland in the late 1800s was, for the most part, dominated by agriculture; Belfast and Dublin were the only two major cities. James Augustine Joyce was born to John and Mary Jane Murray Joyce on February 2, 1882 in a southern suburb of Dublin called Rathgar (Werner ix). Joyce was raised a Catholic and is the second oldest of ten children. Before James Joyce's era, Ireland had experienced "many centuries of economic and cultural impoverishment, political suppression, and religious conflict from the Middle Ages..." (Moss and Wilson 106). Even when Joyce was a young boy, Dublin was still in an extremely depressed economic situation; moreover, his family suffered continuous financial difficulties. In 1904, Joyce decided to leave Dublin for Europe mainly because of his work and his understanding of Irish politics and Irish Catholicism. ...read more.

Joyce had written about Dublin like no other author had before, he was completely truthful and detailed about the city and it's people. In his stories he "made fun of the Holy Roman Catholic Church and its ministers and had mocked the holy cow of Irish nationalism which was probably the most grievous sin of all, and then his own lifestyle did not exactly conform to the norm of Irish life at the time" (Monaghan 70). His visit to Rome had made him more insensitive towards the Vatican, Joyce was insulted by the wealth of the Church in Rome, but the wealth of the Church in Ireland offended him even more. Although Joyce had already rejected the Church, he continued "to denounce all his life the deviousness of Papal policy, which incongruously preferred to conciliate Edward VII rather than to take care of a people of proven Catholic loyalty" (Ellmann 257). On April 27th, 1907 Joyce lectured at the Sala della Borsa, titled 'Ireland, Island of Saints and Sages.' At the evening university, he said the following: The economic and intellectual conditions that prevail... do not permit the development of individuality. ...read more.

Political issues were unending, the church, his family problems, and most importantly, his work. Joyce wanted all the stories in the Dubliners to develop a general theme of paralysis: cultural, religious, and political. He saw this as a trait of daily life in Dublin. In a letter Joyce wrote to his brother, "Joyce indicated that theses works were heavily autobiographical, dealing with his childhood, with people that he knew, with the very streets of Dublin that he walked every day" (Moss and Wilson 110). Joyce intelligently uses his short stories to express the way he felt about Dublin, a good way of expressing his feelings. It is obvious that Joyce wasn't fond of his hometown; however, Dublin dominated his imagination throughout his writing career. By 1907, Joyce's attitude towards Ireland had changed, "sometimes thinking of Ireland it seems to me that I have been unnecessarily harsh. I have reproduced none of the attraction of the city... its ingenious insularity and its hospitality... its beauty..." (qtd. in Goldberg 15). After Joyce's attitude changed towards Dublin, the tone of his work also began to change. After reading "Eveline," I sense that during Joyce's exile, he reckoned that Dublin wasn't a wholly undesirable place to be; which is exactly what he wrote about in "Eveline. ...read more.