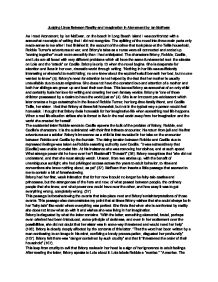 Judging Lines Between Reality and Imagination in Atonement by Ian McEwan

Judging Lines Between Reality and Imagination in Atonement by Ian McEwan As I read Atonement, by Ian McEwan, on the beach in Long Beach Island I was confronted with a somewhat new style of writing that I did not recognize. The splitting of the novel into three main parts only made sense to me after I had finished it; the account of the crime that took place at the Tallis household, Robbie Turner's adventures at war, and Briony's tales as a nurse were all connected and ended up "coming together" much more smoothly than I had anticipated. The characters Briony, Robbie, Cecilia, and Lola are all faced with very different problems which all have the same fundamental root: the attacks on Lola and the "attack" on Cecilia. Briony is only 13 when the novel begins. She is desperate for attention and lives in her own, dramatic world through writing. "Nothing in her life was sufficiently interesting or shameful to merit hiding; no one knew about the squirrel's skull beneath her bed, but no one wanted to know" (5). Briony's need for attention is not helped by the fact that her mother is usually unavailable due to acute migraines. ...read more.

Briony is disgusted by what the letter contains. "With the letter, something elemental, brutal, perhaps even criminal had been introduced, some principle of darkness, and even in her excitement over the possibilities, she did not doubt that her sister was in some way threatened and would need her help" (106). Briony is clearly deeply affected by the contents of this letter. "That the word had been written by a man confessing to an image in his mind, confiding a lonely preoccupation, disgusted her profoundly" (107). Briony felt there was "danger contained by such crudity" and that it "threatened the order of their household" (107). This leap from crudity to evil that Briony makes in her head is a sign of her ignorance to adult feelings. After reading the letter, Briony speaks to Lola about it. Lola labels Robbie a "maniac." "A maniac. The word had refinement, and the weight of a medical diagnosis" (112). Her ignorance is proved even further when she walks in on Robbie and Cecilia in the library. Her confusion, as a child, is understandable, however. She misinterprets the situation to be an attack rather than an encounter of lovers. ...read more.

Briony was a very confusing character because she had a tough time judging the difference between reality and imagination at her premature age. She was conniving towards Robbie and I felt as though she was trying to make her life dramatic in hopes of creating a better story. Most of the issues presented in this novel were not even solved by the end of the book. Robbie was not rid of blame, Briony could not undo her mistakes from the past, and Lola ended up marrying her r****t. That is probably one of the reasons that it was such a frustrating novel to me; everything was made just so that it could not be fixed. I felt at times that the title of, "Atonement," was a poor choice because I did not think that this book ended up fixing a wrongdoing. However while writing this journal one thing proved me wrong, fixing something. Briony started the novel as a character that felt homesick at times when dealing with the real world, and found refuge in her imagination. This led her to sometimes lose the distinction between fantasy and reality. But by the end of Atonement Briony realized that there were strict lines between actuality and imagination, and that when that line is blurred the results can be disastrous. ...read more.