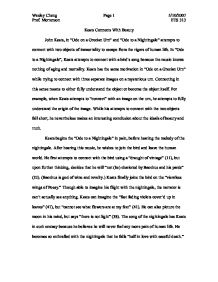 Keats Connects With Beauty, in

Embedded in the urn is an image of revelry and the s****l pursuit, a piper and a lover in pursuit of a fair maid, and a sacrificial ritual (882). The urn the narrator describes is the antithesis of human beings - the urn will not age, nor will it die. The maiden in the poem "cannot fade" (19) and their love will be "for ever new" (24). However, while they are immune to aging, they are frozen in time. As a result, they are robbed of experiencing life. The piper can never kiss the maiden nor can the townsmen who are off to the sacrifice ever return home. Keats tries three times to connect three times with the images on the urn. In the first image, he asks, "What men or gods are these? What maidens loth?" (8) However, this is as far as the narrator can go, because the urn cannot conceivably answer his questions. He then looks to the picture of the piper, describing the experiences of the maiden and her pursuer. Though the two will never kiss, Keats believes the chase for love is more important than actually receiving love. The narrator believes this because while the two are not physically together, the prospect of "more happy, happy love!" ...read more.

Keats' interest in the nightingale goes along the same lines, because the bird, while feeling none of the emotional pain that Keats did, sang the same song that had echoed since the beginning of man. The bird would sing far past the death of Keats, and he admired this much like he admired the immortality of the piper. The urn and the song of the nightingale lived in their own self-contained world and as a result, Keats was never able to penetrate or fully understand these objects. Still, while Keats was not able to connect with the objects in the manner he desired, he still viewed the song and the urn as a "friend to man" (48 Urn). All we needed to know, according to Keats, was that "beauty is truth, truth beauty" (49 Urn). The narrator would never know what the nightingale meant when it sang its songs. Furthermore, Keats would never be able to fully understand the images on the urn because it was created in a different time period. Therefore, Keats would never understand the full truth behind either the song or the urn. But according to Keats' conclusion, none of this mattered. The only truth that he needed to know was that these objects were beautiful and worthy of being admired. Wesley Cheng Page 1 5/10/2007 Prof. Mortenson ETS 313 ...read more.