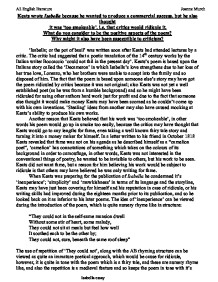 Keats wrote Isabella because he wanted to produce a commercial success, but he also thought it was 'too smokeable', i.e. that critics would ridicule it.What do you consider to be the positive aspects of the poem?

Keats wrote Isabella because he wanted to produce a commercial success, but he also thought it was 'too smokeable', i.e. that critics would ridicule it. What do you consider to be the positive aspects of the poem? Why might it also have been susceptible to criticism? 'Isabella; or the pot of basil' was written soon after Keats had attended lectures by a critic. The critic had suggested that a poetic translation of the 14th century works by the Italian writer Boccaccio 'could not fail in the present day'. Keats's poem is based upon the Italians story called the 'Decameron' in which Isabella's love strengthens due to her loss of her true love, Lorenzo, who her brothers were unable to accept into the family and so disposed of him. The fact that the poem is based upon someone else's story may have got the poem ridiculed by critics because it was not original; also Keats was not yet a well established poet (as he was from a humble background) ...read more.

The idea of 'inexperience' can be viewed during the introduction of the poem, which is quite nursery rhyme like in structure: "They could not in the self-same mansion dwell Without some stir of heart, some malady, They could not sit at meals but feel how well It soothed each to be the other by; They could not, sure, beneath the same roof sleep" The use of repetition of 'They could not', along with the AB rhyming structure can be viewed as quite an immature poetical approach, which would be cause for ridicule, however, it is quite in tone with the poem which is a fairy tale, and these are nursery rhyme like, and also the repetition is a medieval feature and so keeps the poem in tone with it's original story time setting. However, it is an example of one of Keats worries he held about Isabella's publication. Also at the time of writing the poem he was in need of money and so his heart and soul may not have been involved so much in this one as his other work, because it was developed for a very different reason to Keats's normal love of poetry. ...read more.

At the time of writing this poem Keats was already experiencing love, and it was also in a vaguely similar situation to that of Lorenzo and Isabella, because he was forbidden to love f***y Brawne and so this could have fuelled his ideas for the poem along with the original story. Therefore, this poem should not have been susceptible to criticism because Keats may have been writing down his feelings upon his own love in the form of two characters, and it wasn't just 'stealing' another's work, he was adapting a story that connected with his life and filling it with his passion. This is viewed in a letter to f***y when Keats identified with Lorenzo: "In my present state of Health I feel too much separated from you and could almost speak to you in the words of Lorenzo's Ghost to Isabella: Your beauty grows upon me and I feel A greater love through all my essence steal." However, it could have been that after all his own criticism when Keats was ill he finally appreciated this poem as he could identify with it more. ?? ?? ?? ?? A2 English literature Joanne Murch Isabella essay ...read more.