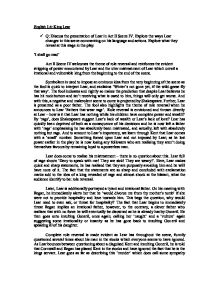 English Lit: King Lear * Q: Discuss the presentation of Lear in Act II Scene IV. Explore the ways Lear changes in this scene commenting on his language and actions. Explore what they reveal at this stage in the play. 'I shall go mad' Act II Scene IV welcomes the theme of role reversal and reinforces the evident stripping of power encountered by Lear and the utter mistreatment of Lear which unveil a irrational and vulnerable king from the beginning to the end of the scene. Symbolism is used to impose an ominous idea from the very beginning of the scene as the fool is quick to interject Lear, and exclaims 'Winter's not gone yet, if the wild-geese fly that way'. The fool indicates and rightly so makes the prediction that despite Lear believes he has hit rock bottom and isn't receiving what is owed to him, things will only get worse. And with this, a negative and malevolent scene to come is projected by Shakespeare. Further, Lear is presented as a poor father. ...read more.

This begs the question, why would Lear need to even ask, or threat for hospitality? The fact that Lear begins to immediately threat Regan implies an irrational father, however, to the contrary, a clever father who realises that with no force he will eventually be disowned as he is already has by Goneril. He then goes onto insulting Goneril, once again, calling her 'naught' and a 'vulture' again suggesting some irrationality or insanity as he has gone back to insulting Goneril and speaking ill of his daughter. Complete role reversal is made evident as Lear has throughout the scene, funnily questioned several times about his man in the stocks which everyone seems to have ignored. As Lear bounces between questioning about a disguised Kent and insulting Goneril, he is told that Cornwall and Regan has placed Kent in the stocks and have ignored the fact that he is the kings servant. Lear goes as far as describing this 'murder' which does call some sympathy towards him as it seems everyone around him is making rash decisions which involve him and leaving him completely helpless. ...read more.

For example 'poor old man' indicates even he has come to realise what he is, he opens his victimized soul onto the audience and allows the audience to be objective and decide if we do actually want to feel some sympathy towards him as despite he is being mistreated, he has brought it upon himself. The speech further seems emotional and he unleashes venom and anger, as you tend to do when you are truly hurt. He threatens the 'unnatural hags' he will take revenge, revenge which he doesn't even know what is yet. After all, Lear has no men, Lear has no wealth, Lear has no support. How on earth is he going to revenge of their mistreatment towards him? Even an insane Lear doesn't know and stumbles as he delivers his speech. The hysterical and insane king finally announces he will rely on nature, the very thing he has gone against from the beginning by choosing the shun responsibilities as king. Pathetic fallacy is used to mirror the turbulent storms onto a chaotic society, an unruly society which has reached optimum reversal as a result of Lear and his hubris. Lear's final accurate declaration of the scene: 'I shall go mad'. ...read more.