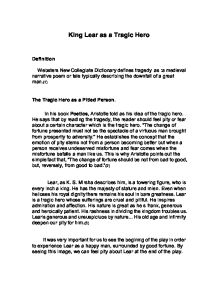 King Lear as a Tragic Hero

King Lear as a Tragic Hero Definition Websters New Collegiate Dictionary defines tragedy as: a medieval narrative poem or tale typically describing the downfall of a great man.(1) The Tragic Hero as a Pitied Person. In his book Poetics, Aristotle told as his idea of the tragic hero. He says that by reading the tragedy, the reader should feel pity or fear about a certain character which is the tragic hero. "The change of fortune presented must not be the spectacle of a virtuous man brought from prosperity to adversity." He establishes the concept that the emotion of pity stems not from a person becoming better but when a person receives undeserved misfortune and fear comes when the misfortune befalls a man like us. This is why Aristotle points out the simple fact that, "The change of fortune should be not from bad to good, but, reversely, from good to bad."(2) Lear, as K. S. Mirsha describes him, is a towering figure, who is every inch a king. ...read more.

Being eminently good is a moral specification to the fact that he is virtuous. He still has to be to some degree good. Aristotle adds another qualification to that of being virtuous but not entirely good when he says, "He must be one who is highly renowned and prosperous." He goes on to give examples such as Oedipus and Thyestes."(4) King lear, as we can see, is not a perfect person. He is affected by the sweet words of his two eldest daughters. He also deprived, Cordelia, his youngest daughter from her right as a heir just because she was not as smooth-tongued as her sisters. Here, the imperfection of Lear is obvious, he is just a normal person who is touched by soft words. Knowing the tragic flaw of Lear, we ask ourselves: Why cannot he be a perfect person? Aristotle gives two reasons why the tragic hero cannot be perfect. First, because the misfortunes of a perfect hero would appear odious and offend our sense of justice; and secondely it would not allow action at all. ...read more.

In king Lear, Lear suffers throughout the play because of his ill judgement. He is confronted with the inhumanity of his daighter as a result of trusting them and depriving his youngest daughter of his fortune. At the end of the play Lear discovers his fault and became nearer to the reality that he was mistaken to Cordelia. This insight did not come to Lear, until he went through the bitter taste of suffering. Aristotle defines discovery as "a change from ignorance to knoledge" it may imply the identity of a person or the discovery whether someones has done or not done something. Discovery, therefore includes the revealing of the whole state of affairs, about which there was previous ignorance or mistake. Thus hamartia, peripety and discovery all go together to bring about the tragedy. Hamartia, therefore, implies the "error of ignorance".(7) Lear does not realize he has commited an error until he has suffered. This suffering is so hard for Lear that it drives him crazy. He finally realizes his mistake in giving the kingdom to his two savage daughters and disowning the one daughter who loves him. ...read more.