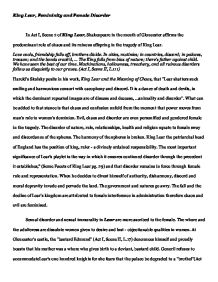 King Lear, Femininity and Female Disorder In Act I, Scene 2 of King Lear, Shakespeare in the mouth of Gloucester affirms the predominant role of chaos and its ruinous offspring in the tragedy of King Lear. Love cools, friendship falls off, brothers divide. In cities, mutinies; in countries, discord; in palaces, treason; and the bonds crack'd, ... The King falls from bias of nature; there's father against child. We have seen the best of our time. Machinations, hollowness, treachery, and all ruinous disorders follow us disquietly to our graves. (Act I, Scene II, L.111) Harold's Skulsky posits in his work, King Lear and the Meaning of Chaos, that "Lear shatters such smiling and harmonious consort with cacophony and discord. It is a dance of death and devils, in which the dominant repeated images are of disease and decease, ...animality and disorder". What can be added to that stance is that chaos and confusion unfold from the moment that power moves from man's rule to women's dominion. Evil, chaos and disorder are even personified and gendered female in the tragedy. The disorder of nature, rule, relationships, health and religion equate to female sway and discordance of the spheres. ...read more.

Goneril and Regan both burn in passion in hot pursuit of Edmund and in the end, they delude themselves and tragically self-destruct. Female disorder is also animalized in the tragedy of Lear. Lear's daughters are called "she-foxes," "tigers," "bitches," "she-pelicans" and "snakes". These animal images connote the same qualities that Lear's evil daughters embody: savagery, cruelty without reason, prompted solely by instinct. All of these carnivorous animals also prey on innocent creatures and have an insatiable thirst for blood. These female images are symbolic of the desperation of evil and the general dehumanization of these women. In Lear, Mother Nature or the goddess Nature goes amiss. She bears sway over fertility, fecundity and the elements of nature. The laws of nature are broken and there is a clear violation of the order of nature and the elements. The references to solar and lunar eclipses by Gloucester are signs of ill omen. Chaotic, vehement, intense storms and wind gales point to the confusion of Nature. Mother Nature breeds further discord among the characters of King Lear for Edmund is a "natural boy"(Act II, Scene I, L.90). He is illegitimate, base and bastard child while his brother is the legitimate son of Gloucester endowed with all its primogenital rights and privileges. ...read more.

Just as Eve uses her feminine wiles like the serpent to seduce Adam into eating what is forbidden, Goneril and Regan use their manipulative language and power to control King Lear, Oswald, Edmund and their emasculated husbands the Duke of Albany and Duke of Cornwall. Chaos is clothed in the garb of the woman in Lear. She is characterized as a whore, devil, animal, disease, and language. Female disorder accentuates the dissolution of the kingdom while in the hands of the women. England is a "gor'd state"(Act. V, Scene III, L.380). Only through the deaths of the women of King Lear that the state is able to heal her wounds and where order is able to be reestablished and stabilized. Debased whores and adulteresses personify chaos and disorganization. Devils and images bespeaking disorder are metaphors for the character qualities of women who go counter to the demands of nature. Animals gendered feminine manifest the lack of humanity and of the softer qualities expected in the woman. Sickness is precipitated by the actions of females whose victims suffer. Deranged senses and corrupted hearts verbalize the state of pandemonium in Lear. Relationships and rapports involving corrupt females promote anarchy and ultimately end in failure. The only way that order is reinstituted in the realm of King Lear is Kent and Edgar assuming administrative duties to set in order the discomposed domain. ...read more.