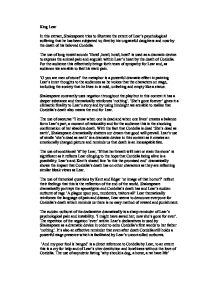 King Lear. In this extract, Shakespeare tries to illustrate the extent of Lears psychological suffering that he has been subjected to; first by his ungrateful daughters and now by the death of his beloved Cordelia.

King Lear In this extract, Shakespeare tries to illustrate the extent of Lear's psychological suffering that he has been subjected to; first by his ungrateful daughters and now by the death of his beloved Cordelia. The use of long vowel sounds 'Howl ,howl, howl, howl' is used as a dramatic device to express the animal pain and anguish within Lear's heart by the death of Cordelia. For the audience this effectively brings forth tears of sympathy for Lear and, as audience we are able to feel his stark pain. 'O you are men of stone!' the metaphor is a powerful dramatic effect in painting Lear's inner thoughts to the audiences as he voices that the characters on stage, including the society that he lives in is cold, unfeeling and empty like a statue. ...read more.

Lear's use of simile 'she's dead as earth' is a dramatic device in this context as it creates an emotionally charged picture and reminds us that death is an inescapable fate. The use of conditional 'if' by Lear, 'If that her breath will mist or stain the stone' is significant as it reflects Lear clinging to the hope that Cordelia being alive is a possibility. Lear's and Kent's shared line 'is this the promised end' dramatically shows the impact that Cordelia's death has on other characters as they are reflecting similar bleak views as Lear. The use of rhetorical questions by Kent and Edgar 'or image of that horror?' ...read more.

It's also an effective reminder that even after death Cordelia still holds a powerful stage presence which is facilitated by Lear's uncontrolled outbursts. 'And my poor fool is hanged' is a direct reference to Cordelia by Lear, to an extent this is a cry for help and of Lear's utter destitution and loneliness without the love of Cordelia. The use of asyndetic listing 'why should a dog, a horse, a rat have life' dramatically persuades us as audience to agree to Lear's logic, why should something so vile and worthless have life and not Cordelia, the supreme embodiment of goodness and piety. 'Never, never, never, never, never', this extraordinary blank verse line reflects Lear's climactic emotional build up of pain and also enables the audience to effectively recall the repetition of 'nothing' in the opening scene. ...read more.