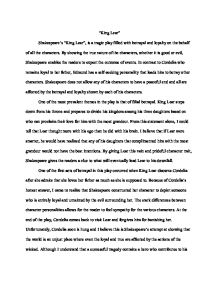 "King Lear" Shakespeare's "King Lear", is a tragic play filled with betrayal and loyalty on the behalf of all the characters. By showing the true nature of the characters, whether it is good or evil, Shakespeare enables the readers to expect the outcome of events. In contrast to Cordelia who remains loyal to her father, Edmund has a self-seeking personality that leads him to betray other characters. Shakespeare does not allow any of his characters to have a peaceful end and all are affected by the betrayal and loyalty shown by each of his characters. One of the most prevalent themes in the play is that of filial betrayal. King Lear steps down from his throne and prepares to divide his kingdom among his three daughters based on who can proclaim their love for him with the most grandeur. ...read more.

One of the first acts of betrayal in this play occurred when King Lear disowns Cordelia after she admits that she loves her father as much as she is supposed to. Because of Cordelia's honest answer, I came to realize that Shakespeare constructed her character to depict someone who is entirely loyal and untainted by the evil surrounding her. The stark differences between character personalities allows for the reader to feel sympathy for the various characters. At the end of the play, Cordelia comes back to visit Lear and forgives him for banishing her. Unfortunately, Cordelia soon is hung and I believe this is Shakespeare's attempt at showing that the world is an unjust place where even the loyal and true are affected by the actions of the wicked. ...read more.

Unfortunately, they both become attracted to Edmund and this causes them to turn on one another. Their jealousies of one another leads to both of their downfalls. I find this interesting on Shakespeare's part because this relationship showed that people who betray would eventually turn on one another. This is a good lesson for children hearing this play because it teaches them that people who betray will always get what is coming to them. Shakespeare does an admirable job creating characters that the readers can relate too. With the obvious "good and bad" characters, the readers were able to predict the outcome of events. Although I found it unfair that Shakespeare allowed even the loyal characters to be affected by the betrayal, I liked the fact that he redeemed himself by showing the readers that those who deceit will eventually get what is coming to them. ...read more.