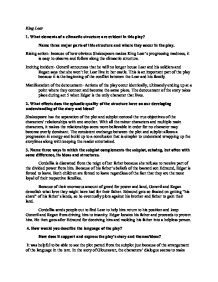 King Lear. What elements of a climactic structure are evident in this play? Name three major parts of this structure and where they occur in the play.

King Lear 1. What elements of a climactic structure are evident in this play? Name three major parts of this structure and where they occur in the play. Rising action- because of how obvious Shakespeare makes King Lear's progressing madness, it is easy to observe and follow along the climactic structure. Inciting incident- Goneril announces that he will no longer house Lear and his soldiers and Regan says that she won't let Lear live in her castle. This is an important part of the play because it is the beginning of the conflict between the Lear and his family. Manifestation of the denouement- Actions of the play occur identically, ultimately ending up at a point where they connect and become the same piece. The denouement of the story takes place during act 5 when Edgar is the only character that lives. 2. What effects does the episodic quality of the structure have on our developing understanding of the story and ideas? Shakespeare has the separation of the plot and subplot conceal the true objectives of the characters' relationships with one another. ...read more.

Cordellia sends people out to find Lear to help him return to his position and keep Goneril and Regan from driving him to insanity. Edgar locates his father and proceeds to protect him. He then goes after Edmund for deceiving him and molding his father into a helpless person. 4. How would you describe the language of the play? How does it support and express the play's story and themes/ideas? It was helpful to be able to see the plot parted from the subplot just because of the arrangement of the language in the text. In the story of Gloucester, the characters' dialogue seems to make more sense and contain more logic. Even though Edgar may seem a bit irrational for a large part of the play, he proves that he has a knack for disguising himself and manages to keep his sanity throughout the play. In the story of King Lear, the language contained more madness. As the story progressed, Lear lost all reason and logic in what he was saying, where as the Fool made more and more sense as Lear became more psychotic. ...read more.

in order to C." Remember, that this must address the play as a whole, not a particular point in the play only. Goneril, Regan, and Edmund are alike in a sense that they all lie to their respective fathers just to gain power even with the ultimate ruin of their kingdoms and characters. 7. What is the play's major thought (idea, theme, etc.)? (This should not be expressed in a single word or phrase, but should resemble an assertion or viewpoint on the world.) What other significant ideas are evoked? Justice: Both Edgar and Cordellia obtain proper justice in the end of the play. Edgar finally ends up ruling over his land and Cordellia receives the love that was lost in the beginning of the play. Blindness: The guarded truth in King Lear is extremely important in a sense that it is only when the true motivations of the characters are revealed that we as the audience start to understand what it truly means to be blind. Both Lear and Gloucester are blind; Lear is unable to see through the lies that his disloyal daughters tell him and Gloucester in the literal sense that his eyes get removed. ...read more.